The new cases on the island were among 1,205 cases found across the province over the past 24 hours.

Three more people have died of the disease, health officials announced Thursday, bringing the province’s pandemic death toll to 1,524. None of the recent deaths were in the Vancouver Island region, where the pandemic has killed 33 people.

Officials have now recorded 4,184 cases of COVID-19 in the island region since the pandemic began.

There are now 528 active cases of COVID-19 in the Vancouver Island region, including 20 people in hospital and four more in critical care.

Island Health identified the locations of 497 active cases Thursday, including 273 in the South Island, 184 in the Central Island and 40 in the North Island.

The province’s latest pandemic modelling data released Thursday indicates that Vancouver Island’s COVID-19 reproductive number – how many people each person with the disease typically goes on to infect – remains above the provincial average.

The reproductive rate on Vancouver Island reached a high of 1.51 in the early days of the pandemic but has since dropped to 1.28, according to the health ministry.

The average reproductive rate for the whole province is currently 1.26, putting the Island Health region’s infection rate higher than the Vancouver Coastal Health region (1.13), but below Fraser Health (1.31) and the Interior (1.60).

The reproductive rate across the province remains above one in all health authorities except the Northern Health region (0.93).

“We have started to see a slowing or a bending back down of the reproductive number,” said provincial health officer Dr. Bonnie Henry. “We are still seeing concerning transmission in parts of the Interior, where Vancouver Island and the North are coming down again.”

Communities in Vancouver Island’s Oceanside region recorded the highest rate of new infections in Island Health over the past week, with an average of between 10 and 15 new infections per 100,000 people between April 7 and April 13. For comparison, Greater Victoria recorded between five and 10 new cases over the same seven-day period while the Comox Valley had an average of five or less. 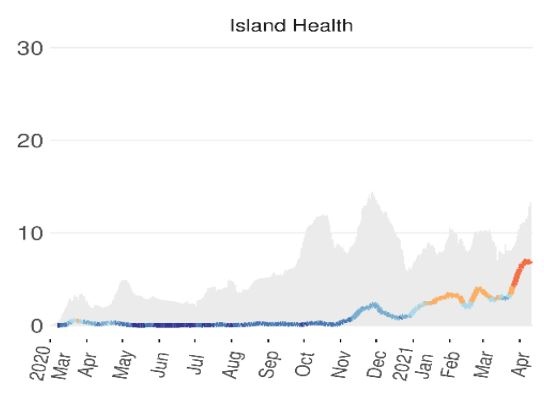 “This is our third wave and we have done this before,” Henry said, urging British Columbians to make “small sacrifices every day” to abide by public health orders against travel and social gatherings. “We will get through this storm together.”

Despite the suggestion earlier this week, including from Premier John Horgan and the B.C. restaurant industry, that the province could use Thursday’s news conference to extend or expand restrictions on activities like indoor dining in restaurants, no such changes were indicated.

B.C.'s current ban on indoor dining was announced on March 29 and remains in effect until April 19.

Notwithstanding the lack of further restrictions, B.C.’s top doctor warned that the recent surge of COVID-19 variants means indoor gatherings are now more unsafe than ever.

“If I am seeing a group of 10 people, the probability that one of them has the virus and the potential to spread it to me right now is highest that it’s ever been,” said Henry.

“The risk is not zero if you’re sitting on a patio with somebody right now. The risk is less though than inside.”

B.C. has now administered 1,235,863 COVID-19 vaccine doses across the province, according to health officials.