VICTORIA -- B.C. health officials say three cases of COVID-19 were recorded in the Vancouver Island region Tuesday, as the province revealed its plan to ease restrictions over the next several months.

Tuesday's update marks the lowest number of new cases recorded in the Island Health region in a 24-hour period since Christmas Day 2020, according to the BC COVID-19 dashboard.

The island's new cases were among 289 cases found across the province over the past 24 hours. B.C. has now recorded 142,636 cases of COVID-19 since the pandemic began, including 5,018 found on Vancouver Island.

There are currently 134 active cases of COVID-19 in the island region, including 11 people in hospital and three more in critical care.

Island Health identified the locations of 93 active cases Tuesday, including 30 in the South Island, 36 in the Central Island and 27 in the North Island.

Health officials say one more person has died of COVID-19 in B.C., bringing the province's pandemic death toll to 1,680. The death did not occur in the Vancouver Island region, where 40 people have died during the pandemic.

As of Tuesday, just over 64 per cent of B.C.'s adult population had received their first dose of vaccine, according to health officials.

On Tuesday, the B.C. government outlined its plans to gradually reopen the province as COVID-19 cases decline and more people receive vaccines.

Health officials say the province will reopen in four steps, with the final reopening phase resembling life before the pandemic.

The first step begins today, May 25, and includes an easing of circuit-breaker restrictions that were put in place in April.

Indoor dining for up to six people has resumed, and limited indoor faith gatherings can restart. Outdoor sports can also resume, as well as low-intensity fitness classes. B.C. residents can also have up to five friends over for indoor social gatherings at home, and outdoor organized events of up to 50 people, such as weddings with COVID-19 safety plans, can be hosted. Circuit-breaker travel restrictions remain in place.

The second step is estimated to begin in mid-June, depending on case and vaccination rates, something that health officials say will be reviewed before the transition to each new step.

At least 65 per cent of B.C. adults must be vaccinated before step two begins, which includes larger indoor gatherings, such as audiences of up to 50 people for movie theatres, as well as no restrictions for travelling within B.C.

Step three will begin in early July, assuming COVID-19 cases have stabilized or declined and at least 70 per cent of the adult population has been vaccinated. This step will include reopening plans for nightclubs and casinos with limited capacity.

The provincial state of emergency will also be lifted in step three, and looser restrictions will be in place for indoor dining and indoor social gatherings.

The final step, step four, will begin in September at the earliest. In this step, British Columbians will be able to return to pre-pandemic social contact levels, and spectators will be allowed to return to sports. Businesses will also be operating under new safety plans.

A detailed look at the province's reopening plans can be found here.

"We have been on a long and tiring journey, and now we can start to chart our path forward to brighter days ahead," said provincial health officer Dr. Bonnie Henry in a statement Tuesday.

Henry noted that the start dates for each "step" are subject to change, depending on vaccine and case rates.

B.C.'s top doctor says data, and not dates, will inform the beginning of each step. However, she noted that the province is trying to give businesses and residents an estimate for when activities can restart in B.C.

"It's been over a year since we asked everyone to do their part by staying apart, and today we begin the work of bringing people back together," said B.C. Premier John Horgan. 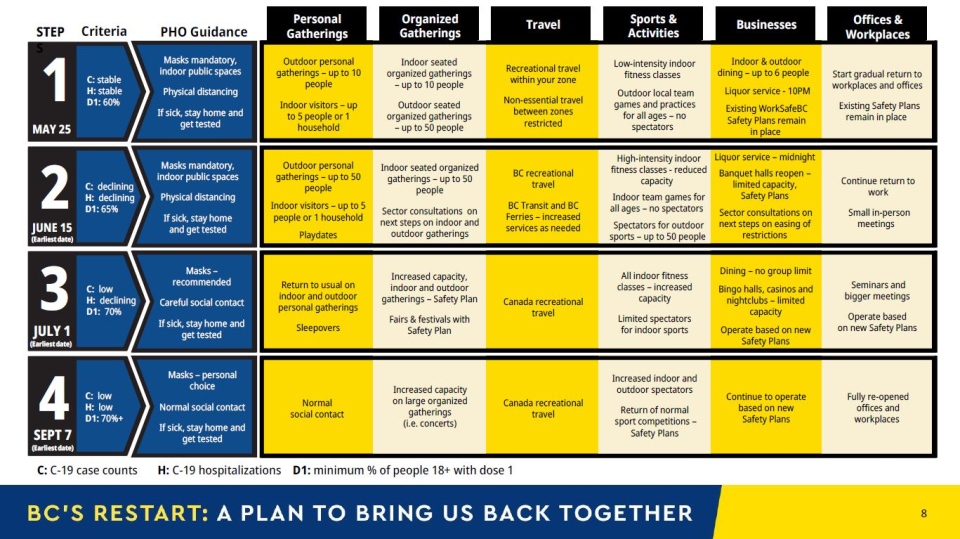 Is B.C. flooding affecting the province's COVID-19 numbers? Not yet, Health Ministry says