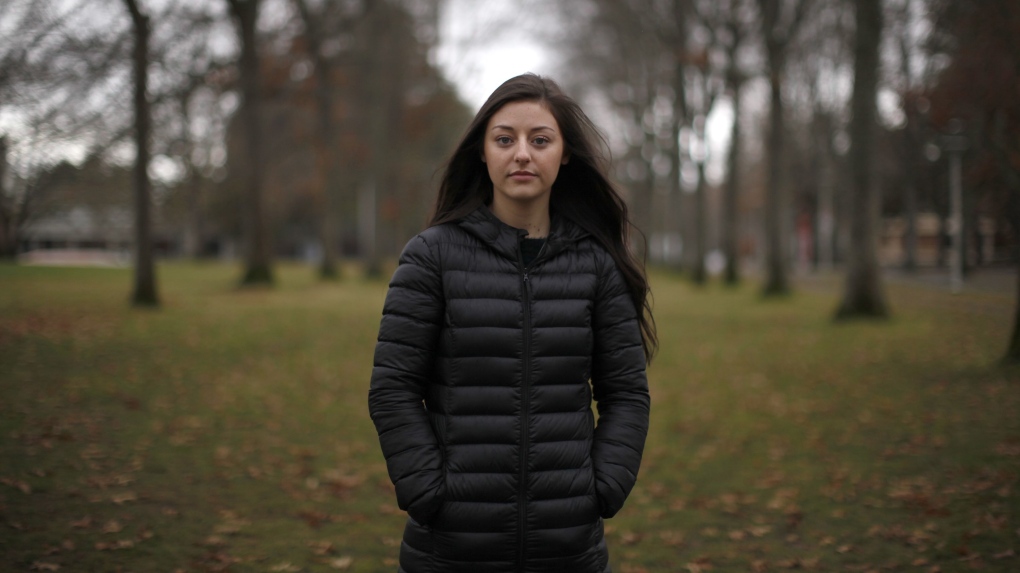 Former University of Victoria coxswain Lily Copeland is photographed at UVic campus in Victoria, B.C., on Saturday, November 16, 2019. Three rowers who accused coach Barney Williams of harassment and abuse say the University of Victoria has threatened them with disciplinary action if they speak about the results of the investigation. (THE CANADIAN PRESS/Chad Hipolito)

VANCOUVER - Three rowers who accused coach Barney Williams of harassment and verbal abuse say the University of Victoria has threatened them with disciplinary action if they speak about the results of the investigation.

An appeal process examining the allegations has ended and athletes were provided with a report Thursday, but they said in a joint statement they don't feel comfortable saying anything about it.

A letter sent to the students warned that the hearing report, decision and all records pertaining to the complaint are to be kept in the “strictest confidence.”

“The end of the formal complaint process does not signal the end of confidentiality obligations. A failure to comply with the provisions of the policy may result in disciplinary action by the university,” the letter said.

Lily Copeland is one of the complainants and has alleged Williams criticized her weight and appearance and yelled at her in a small, locked room. She said the treatment shattered her confidence and she began cutting herself and throwing up her food.

Williams did not immediately respond to a request for comment Friday. He has previously said he's committed to respecting the confidentiality of the probe and he regards coaching as a privilege. Some members of the team credit him with their success.

He returned to coaching at the University of Victoria last month even though the process was still underway.

Team member Chanel Mandap said Williams was coaching on Friday. She said she hasn't been told anything by the coach or the university about the outcome of the investigation.

“The team has been lacking clarity during this entire process and as a result there have been a lot of emotions around the whole situation,” she said, adding the team is polarized.

The university faced criticism in 2016 for warning a sexual assault complainant she could be disciplined if she spoke about an investigative report with anyone other than her family, lawyer, counsellor or police.

At the time, the school said students are free to tell their stories, but it cautioned against disclosing third-party information. The case was cited when the former British Columbia government brought in a law to require universities to have sexual assault policies.

In a statement Friday, the University of Victoria disagreed that it “threatened” disciplinary action. It said it has a responsibility to explain to parties their obligations under school policy, including possible consequences of breaching confidentiality.

“The investigation itself, with information provided by the complainant, witnesses and the respondent, is subject to the confidentiality provisions of the policy. The findings by an independent investigator and by an external adjudicator who conducts an appeal are likewise confidential.”

Employment lawyers said confidentiality is an important part of a fair process but questioned whether universities would follow through with discipline.

“What is the school going to do?” asked Richard Johnson, a partner with Kent Employment Law in Vancouver. “They may have a policy where they sanction people for disclosing that they were in a complaint process. Are you really going to victimize a student twice?”

The school should be very careful not to come down too hard on complainants and should instead explain that confidentiality can be beneficial to them as well, he said.

Malcolm MacKillop, a partner with Shields O'Donnell MacKillop in Toronto, said he has seen cases where a workplace has fired an employee for speaking publicly about an investigation.

“Students are not employees,” he added. “I'm not aware of any case where a student was actually thrown out of a university because they decided to go public on an investigation. Imagine if the university actually did it.”

MacKillop said he was sympathetic to the argument that universities are public institutions that receive taxpayer funding and bear more responsibility to be accountable than private companies.

“You're talking about public trust, public funds,” he said. “There is a feeling of high-handedness in threatening students. It creates a potential fear.”

The three athletes add in their statement that they're feeling positive about moving forward “under Safesport policy and process.”

Rowing Canada Aviron, the body that certifies coaches in the country, is also investigating allegations against Williams. The organization has adopted Safesport procedures, which are policies for an athletic environment free of abuse, harassment or discrimination.

“They're crucial,” she said. “Otherwise, you don't really protect the athlete.”

The University of Victoria does not have a code of conduct for coaches but said it is developing one. It also said it's creating an athlete support officer position who will be responsible for developing education programs and support services for varsity athletes.

This report by The Canadian Press was first published Nov. 22, 2019.