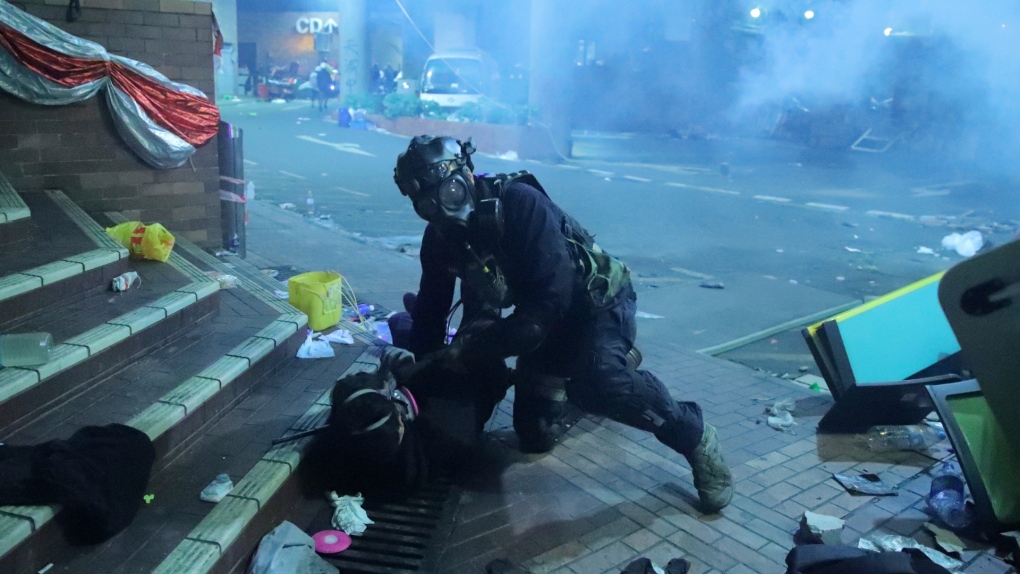 A policeman in riot gear detains a protester outside of Hong Kong Polytechnic University as police storm the campus in Hong Kong, early Monday, Nov. 18, 2019. Fiery explosions were seen early Monday as Hong Kong police stormed into a university held by protesters after an all-night standoff. (AP Photo/Kin Cheung)

VICTORIA – The University of Victoria says all its exchange students in Hong Kong are safe amid the recent, rapid escalation of violence in the territory.

The university's director of global engagement tells CTV News that administrators have contacted all eight of the school's Hong Kong-based students who report that they are safe after a weekend of protests and clashes with police.

"We have been advised that these campuses are closing for the remainder of the semester, due to the geopolitical and civil unrest," UVic program director Carolyn Russell says.

"The universities are providing alternate teaching arrangements for students to complete their term studies through electronic education."

Russell says UVic faculty are following up with the students to arrange travel plans should they wish to leave.

The warnings came after police moved in on hundreds of protesters who had barricaded themselves inside Hong Kong Polytechnic University over the weekend.

"We always advise our students to exercise due caution, stay alert, be aware of their surroundings and trust their instincts to remain safe while abroad," Russell says.

"We also suggest they enrol in International SOS to receive travel alerts, enrol in the Registry of Canadians Abroad and to follow the Embassy of Canada to China or Consulate General of Canada, Hong Kong, on social media."

The latest violence comes after five months of protests against growing Chinese control over the city. Last week, protesters used gasoline bombs and arrows to keep back riot police, who countered with armoured cars and water cannons.

More than 150 people were arrested over the weekend as police stormed Hong Kong Polytechnic University. Still more could face charges for rioting.