UVic bus in fatal crash rolled after it moved for Jeep on logging road: RCMP 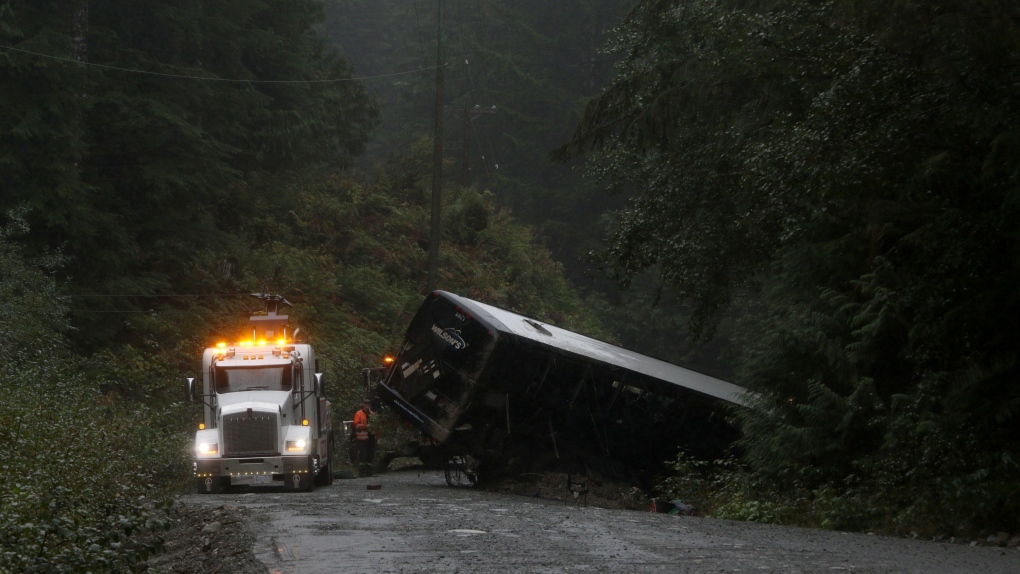 A police crash reconstruction says a bus loaded with University of Victoria students moved over for an oncoming vehicle just as a logging road narrowed before the rollover that killed two students. A tow-truck crew removes a bus from an embankment next to a logging road near Bamfield, B.C., Saturday, Sept. 14, 2019. (THE CANADIAN PRESS/Chad Hipolito)

A bus loaded with University of Victoria students moved over for an oncoming vehicle just as a logging road narrowed before it rolled over in September, killing two students, a police crash analyst says.

The Mounties used a 3D scanner and the event data recorder on the bus to piece together the crash, said RCMP Sgt. Brian Nightingale, a crash reconstructionist.

It was dark and raining on Sept. 13 when the bus was travelling on a gravel road, Nightingale said in an interview on Tuesday.

When a Jeep came down a hill towards the bus the driver pulled onto the soft shoulder and then the bus rolled down an embankment, he added.

“He starts to pull to the right and at that precise moment, the roadway width decreases from 10.8 metres to 9.2 metres wide,” Nightingale said.

“He still had enough room, but he makes his adjustment right at the same time when the road is narrowing and that's the bottom line right there.”

The bus hit the soft shoulder on the gravel logging road and rolled onto its roof, resting about three metres below the road, he said. Thick trees along the road prevented the bus from going any further down the steep embankment, Nightingale said.

Forty five students and two teaching assistants were on the bus that was going to the Bamfield Marine Sciences Centre on Vancouver Island's west coast. The crash happened about 40 kilometres from Port Alberni.

Two students, Emma MacIntosh Machado of Winnipeg and John Geerdes of Iowa City, Iowa, died in the crash. They were both 18 years old.

After the crash, First Nations and the city of Port Alberni said there had been numerous complaints about the condition of the privately owned logging road. They called on the provincial government to improve the conditions on the 85-kilometre road.

Nightingale said there were no road markings but there's no indication that either vehicle was on the wrong side of the road.

He said the bus had been travelling at about 30 km/h along the road but just before the rollover the bus had slowed to seven km/h.

Nightingale said whether seatbelts were being worn did not form part of his investigation.

“The bus was equipped with seatbelts, seatbelts were available. Injuries are mitigated when seatbelts are being worn. That's always been my experience from Day 1.”

Nightingale said the report has been given to the BC Coroners Service as part of the police investigation but its findings don't determine any criminal or civil liability.

Andy Watson of the BC Coroners Service said its investigation into the two deaths remains open and it will allow other investigations into the crash to be completed before it concludes its probe.

He said the deaths don't meet the requirements for a mandatory inquest, although the chief coroner does have discretion for reasons of public interest or patterns in deaths to request one.

This report by The Canadian Press was first published Dec. 17, 2019.