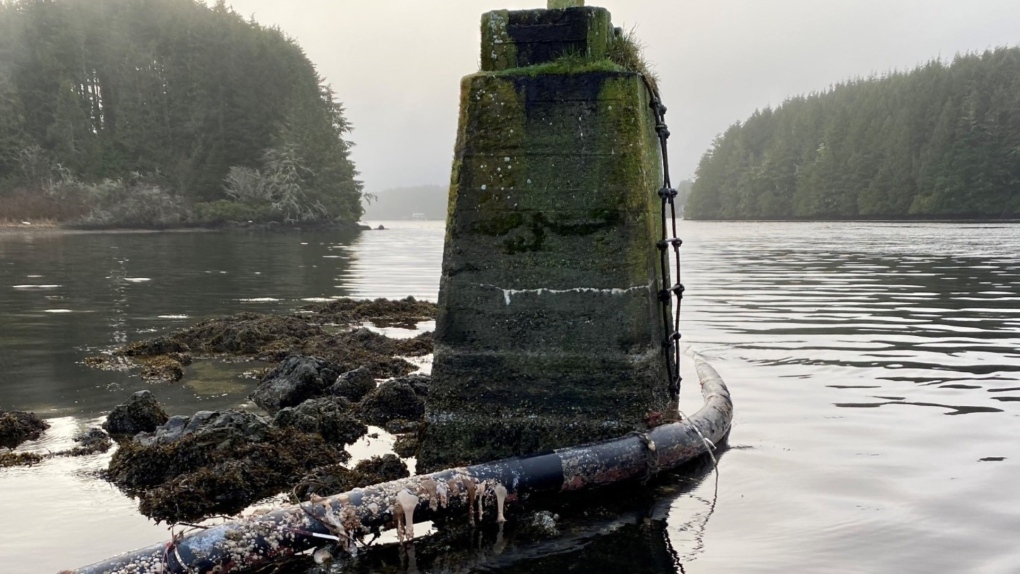 A section of the affected water line is shown: (District of Ucluelet / Facebook)

Residents in the Ucluelet First Nation on the west coast of Vancouver Island have been warned not to use their household water for anything besides flushing toilets after an underwater water main that serves the community was damaged.

The Yuułuʔiłʔatḥ government has declared a state of emergency over the water main break, which occurred Monday.

The District of Ucluelet believes that Saturday's tsunami near Tongo, and a passing boat, are the causes of the damage.

District officials say they could see the water level rising and lowering in the inlet every few minutes for an hour and a half after the tsunami occurred.

"We think it dislodged the line from its anchorage in the bottom of the inlet and what would have happened then is it would have floated up to the surface, and that's where the tug would have impacted it," said Duane Lawrence, chief administrative officer with the District of Ucluelet on Wednesday.

As repairs are underway, bottled water is being trucked into the community. A local motel is also offering shower services.

"Much gratitude is extended to the West Coast Motel and their staff," said an update from the Yuułuʔiłʔatḥ government Tuesday.

The District of Ucluelet and an industrial dive team have been working to repair the damaged water main.

The damaged section of the water main must be floated out of the water, inspected, repaired, then reattached underwater, says the municipality.

On Tuesday, the district said about 300 metres of line was cut and brought onshore for inspection.

"Work on the damaged water line is progressing well and our public works team is moving quickly to re-establish this critical line back to service and re-supplying water to Yuułuʔiłʔatḥ," said the district in an update Tuesday.

Both the district and Ucluelet First Nation say there's no timeline for when residents can use water again safely.

"In order for the state of emergency to be lifted, the water system needs to be flushed and thorough testing must be done on the tap water to ensure it is safe for consumption," said the Yuułuʔiłʔatḥ government in an update Tuesday.

"This process will take some time," reads the update. "As more information is gathered, further updates will be issued."

11 killed in shooting attacks on 2 bars in Mexico

200 bodies found in Mariupol as war rages in Ukraine's east

Actor Amber Heard rested her case Tuesday in the civil suit between her and ex-husband Johnny Depp without calling Depp to the stand.

'The destruction is incredible': 150,000 Ontarians remain without power, says Hydro One

A Hydro One spokesperson says the storm that ripped through Ontario over the long weekend has caused significant damage across the province, and it could still be days before some power outages are restored.

As government officials, corporate leaders and other elites at the World Economic Forum grapple with how to confront climate change and its devastating effects, a central question is emerging: to what extent can oil and gas companies be part of a transition to lower-carbon fuels?