A wild, two-year journey through B.C.'s breathtaking Great Bear Rainforest will soon grace the largest screens in the world as a feature-length IMAX movie.

Filmmakers have partnered with First Nations to provide an in-depth look at the region – a raw landscape rife with grizzly bears, wolves, whales and the famed Kermode or "spirit" bear.

"The goal is to make a beautiful film about this coast," said Ian McAllister, a filmmaker with the non-profit conservation group Pacific Wild. "This is probably the biggest natural history film that's ever been done in Canada and it's taken a lot of very talented people to make it happen."

Nestled on B.C.'s Northern Coast, the Great Bear Rainforest is home to many First Nations who filmmakers have not only teamed up with, but focus on in the film.

"It's going to be very exciting to see that through that lens," said Heiltsuk Nation member William Housty. "Conservation-wise, this film will really inspire a lot of people to realize the importance of making sure that places like this region are highlighted and preserved for the future."

The rainforest has been the focus of conservation efforts in recent years.

That activism has pushed the provincial government to protect 85 per cent of old-growth forest in the region and ban most grizzly bear trophy hunting – but there are still issues, particularly on the water.

Last year, a tug boat sank off the rainforest's coast, leaking more than 110,000 litres of diesel fuel into waters that provide the Heiltsuk with at least 25 different food species.

The chief of the Heiltsuk Nation, Marilyn Slett, said the incident has had devastating consequences for the area, with a valuable fishing area remaining closed a year after the spill.

Pacific Wild hopes that IMAX exposure of the area, especially to Canadian youth, will inspire more to step up and protect it.

"The opportunity to educated generations of students is like no other with an IMAX production," said McAllister.

The film is slated to be released on IMAX screens in spring of 2019. 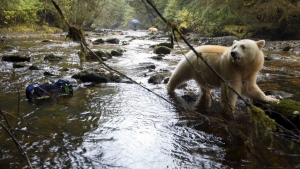