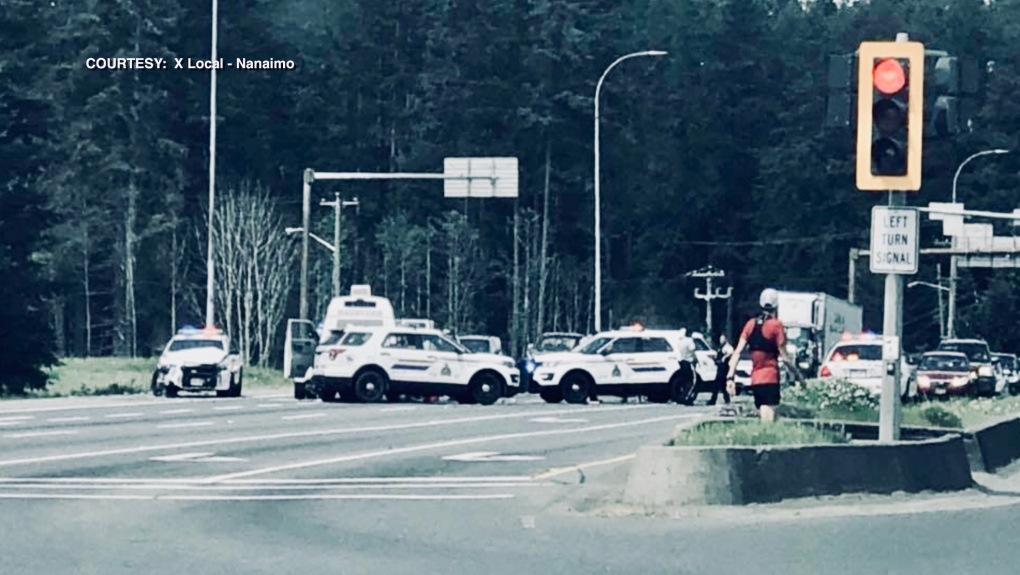 The driver was taken into custody following the pursuit and police said there were already warrants out for his arrest. (X Local - Nanaimo/Facebook)

A dangerous police chase in Nanaimo involving a stolen van and several RCMP members ended dramatically Saturday afternoon after two cruisers were totalled during the takedown.

It all started around lunchtime when Nanaimo RCMP received a call about a woman who was apparently yelling for help from inside a parked van on Applecross Road.

When police arrived on scene, a male suspect sped away in the van with the woman still inside.

“Because of the actions of the driver, it made us believe something serious was happening,” said Nanaimo RCMP Const. Gary O’Brien.

“That gave us the grounds to follow that vehicle.”

The RCMP said the man was driving very erratically.

“The vehicle went through stop signs and traffic lights,” O’Brien said. “He was going in the wrong direction on Highway 19A at different times and almost struck several pedestrians.”

The chase came to an end when police rammed the vehicle on the Nanaimo Parkway at the Mostar Road intersection. The driver was attempting to go southbound in the northbound lanes during the takedown. Two police cruisers were destroyed in the collision.

The suspect was taken into custody and police said there were already warrants out for his arrest.

Police said the van he was driving was stolen.

The woman was found safe inside the vehicle and was later released. It is unclear to the RCMP why she was yelling.

The driver remains in police custody and is facing several charges, including possession of stolen property, evading arrest and dangerous driving.