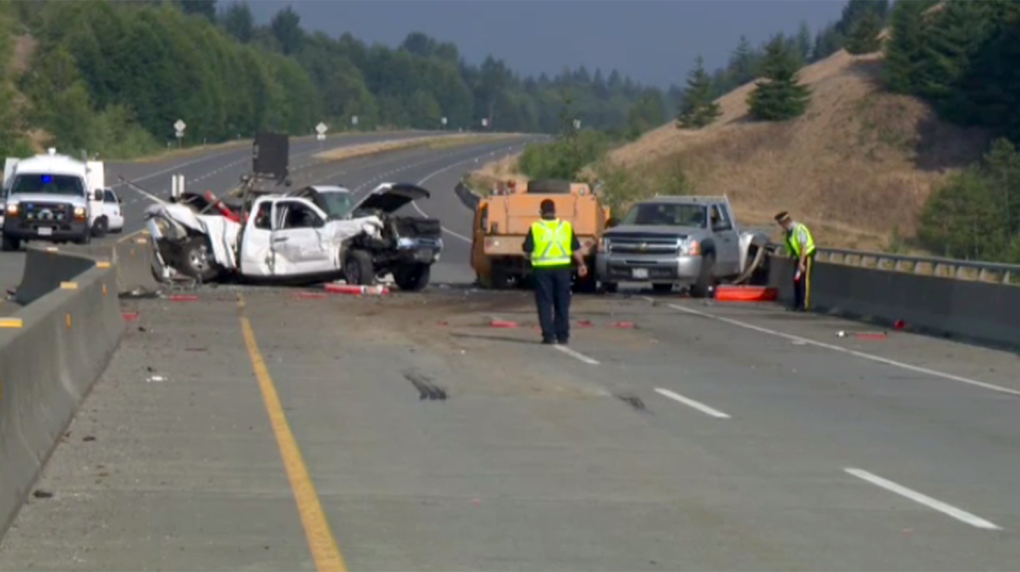 A three-vehicle crash on Highway 19 southwest of Qualicum Beach has sent two people to hospital with serious injuries.

Police described a bizarre chain reaction of events that led to the crash, which happened before 7 a.m. on the Little Qualicum Bridge deck.

It started when a northbound pickup truck drive by a 43-year-old Qualicum man lost a ladder on the bridge deck, according to authorities.

A vehicle behind it, driven by a 47-year-old Parksville woman who happened to be a flagger, saw it happen and activated flashing lights to try to help the man, who had pulled over to grab the ladder.

With the woman directing traffic, the man went to retrieve the ladder when a third pickup truck driven by a 23-year-old Nanaimo man collided with both of the parked vehicles.

The man on foot was struck and thrown an unknown distance. He has since been airlifted to Victoria General Hospital with serious injuries.

The driver of the third pickup truck also sustained serious injuries and officers had extract him from his vehicle using the Jaws of Life.

He was taken by ambulance to Nanaimo General Hospital with serious injuries.

The flagger who stopped avoided the crash and was uninjured.

All three of the pickup trucks were totaled in the collision.

The crash shut down a stretch of Highway 19 for several hours and vehicles had to be detoured to Highway 19A.

The highway has since been reopened.

RCMP and Central Vancouver Island Traffic Services are obtaining evidence from the scene and investigate the cause further.

Alcohol does not appear to have been a factor, police say.