VICTORIA -- Another transport truck has gotten lodged under a notorious Vic West bridge that is sometimes referred to as "the can opener."

Co-owner of All-Ways Towing, Cheryl Parker, says that a tow truck was called to the scene on Hereward Road just before 12:30 p.m.

The structure, an out-of-commission E&N rail bridge, has a history of damaging larger vehicles, including in a 2017 incident that nearly tore the entire roof off a semi-truck that was travelling underneath it.

At approximately 1 p.m. Tuesday, police could be seen shutting down the area to traffic as tow crews attempted to remove the lodged vehicle. 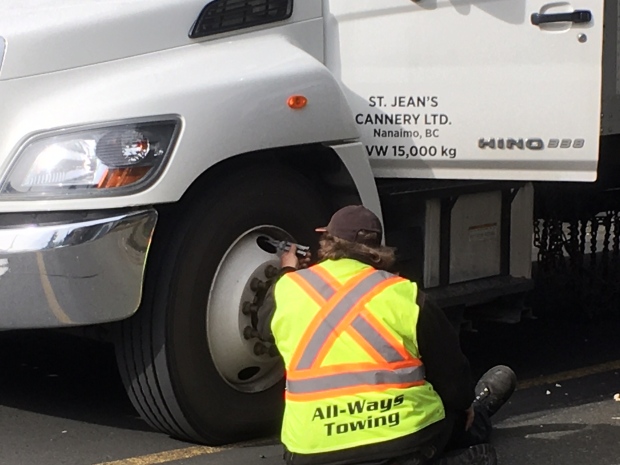 “The procedure to remove the stuck truck was quite the process,” said Parker.

“We lowered the air out of the tires so that we could pull it backward out from under the bridge but it was catching the front fairing where the refrigeration unit is,” she said. “So we tried to pull it forward and get that fairing to come back down but, unfortunately, the damage was done.”

“We just had to eventually just yank it backwards and get it done.”

According to Parker, All-Ways Towing gets calls to remove a truck from the Vic West bridge roughly two times a year.

“Every year, about twice a year, a truck gets stuck under this bridge,” said Parker. “In our history of towing, [it’s happened] about 20 times.”

The decommissioned rail bridge stands 3.7 metres high, with signage displayed on both sides. In 2017, some Victorians told CTV News that they believed the signage needed to be more prominent.

At the time, the City of Victoria told CTV News that the signage was reasonably visible and followed all standard procedure, and that it was up to drivers to pay attention to streets and to be aware of the height of their vehicles.