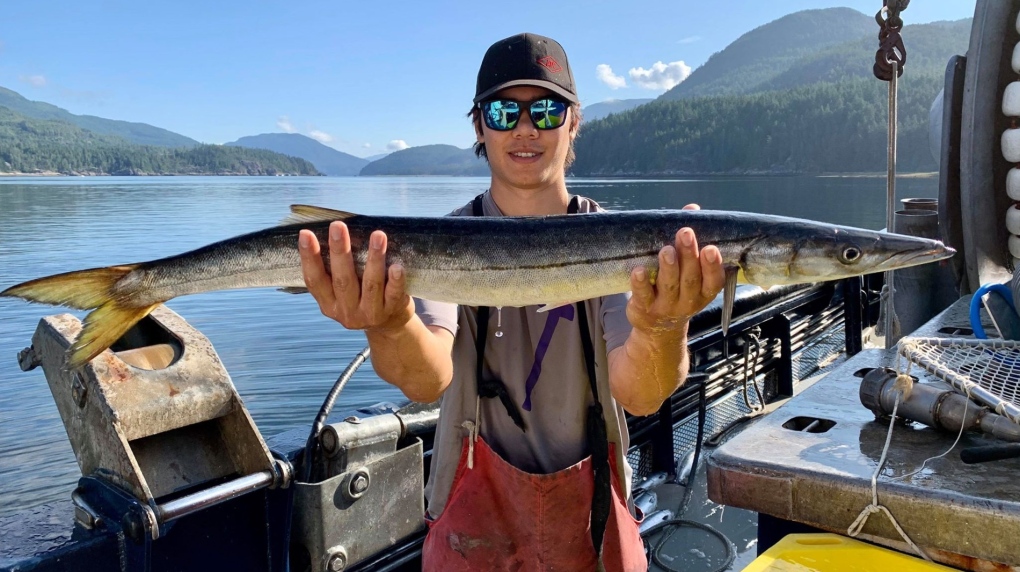 Tyler Vogrig and his father caught the tropical fish on July 5, 2020, while conducting a salmon stock assessment for Fisheries and Oceans Canada. (Tyler Vogrig)

VICTORIA -- A fish that typically makes its home in tropical waters has been caught in the Alberni Inlet, on the west coast of Vancouver Island.

The barracuda was hauled up on July 5 by Tyler Vogrig and his father, Brian, who were aboard their fishing vessel conducting a stock of assessment of salmon for Fisheries and Oceans Canada (DFO).

The 24-year-old Vogrig, who's been fishing with his father since he was 14 years old, says his dad noticed the large predatory fish in their net was being followed by some seals.

Vogrig says the fish was docile when he pulled it up with a hand net and placed it in the ship's revival tank for about 20 minutes while his father contacted the DFO to find out what to do with it.

Once the barracuda was revived, it was released back into the ocean.

"I've been a fishing buff my whole life and I get excited when I see rare animals like this," says Vogrig.

Richard Dewey, the associate director of science with Ocean Network Canada, says the barracuda discovery is consistent with the sporadic trend of warm-water species showing up off the coast of B.C. as water temperatures increase due to climate change.

"They do come up, these rare species, periodically," says Dewey. "It's not completely unheard of, but it's a trend we want to continue to monitor."

Barracuda are known to be an aggressive and fast-moving fish with a high metabolism, therefore needing to consume a lot of prey. It's the same prey that native species like salmon depend on.

Dewey says barracuda travel in large packs, so if one was caught, there are likely more off the B.C. coast.

"As the climate shifts and these ecosystems perhaps shift further northward – which is an anticipated consequence of climate change – then we would expect see perhaps more encroachment of these warmer species more regularly and in higher numbers," he says.