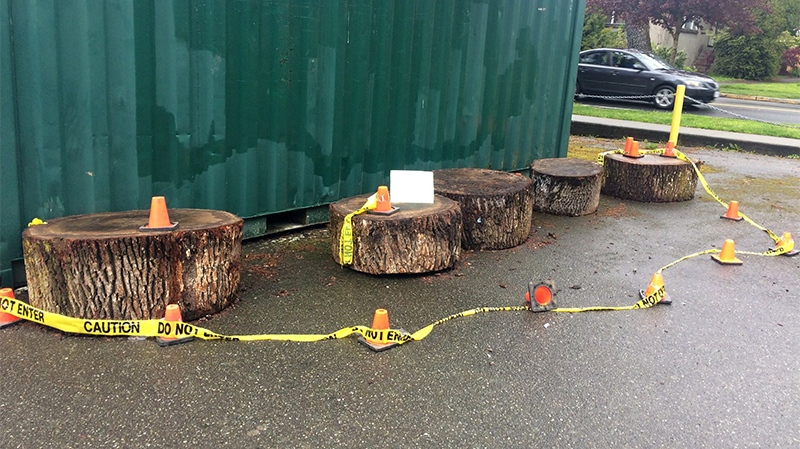 Stumps stolen from outside Quadra Elementary were intended for a nature play space to help keep kids connected with the outdoors. May 4, 2017. (CTV Vancouver Island)

Parents at Quadra Elementary are stumped over the theft of more than a dozen tree stumps and logs earmarked for a unique playground at the school.

The stumps left outside at Quadra Elementary were intended for a nature play space to help keep kids connected with the outdoors.

Volunteers gathered between 15 and 20 stumps donated to the play space, but sometime late last week, thieves made off with about 10 of them.

“It was really disappointing to find out that most of them had been taken away,” said Bonnie Davison, a parent and founder of the Outdoor Learning Association. “We noticed at the end of last week and one of the neighbours said that she noticed a couple of men with a small brown truck taking them.”

Davison says since the theft happened and the group posted about it on Facebook, she’s seen an outpouring of support from the community.

“I posted my disappointment on Facebook and hoping that the people who took them would maybe do the right thing and bring them back,” she said. “We’ve had so much response, and that’s what really shows to me the feel of this community.”

Strangers have offered to look for logs, while others say they have stumps they’re willing to bring to the play space.

“We make lemonade out of lemons. This is just a very small thing that happened and what came out of it was just how strong and connected and loving this community is,” said Davison.