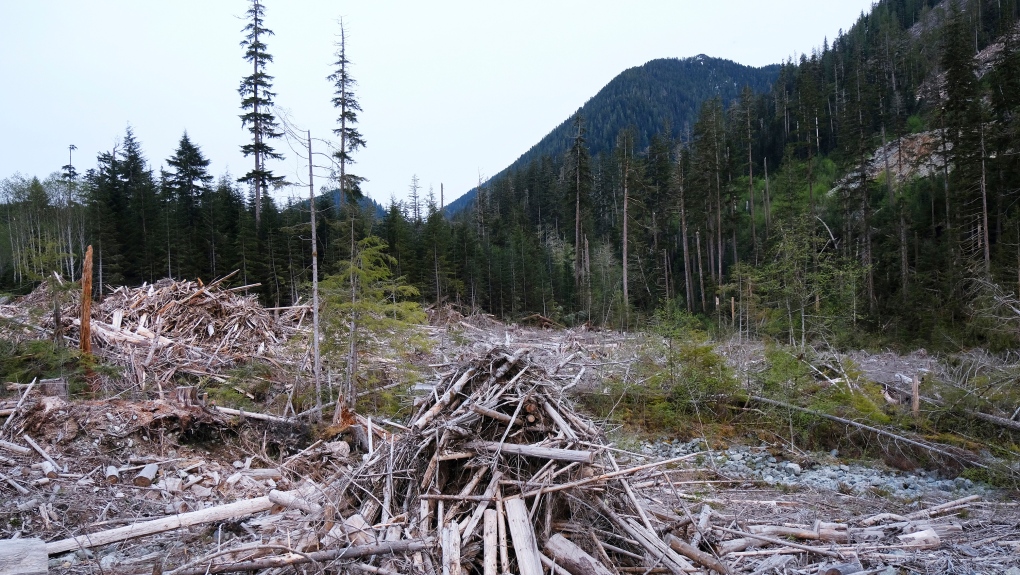 Dead trees and refuse are shown along the Bugaboo, a logging road in the Fairy Creek area near Port Renfrew, B.C., on Tuesday, May 11, 2021. A number of blockades are set up in the area to prevent the logging of old-growth forests. THE CANADIAN PRESS/Jen Osborne

Forestry experts and officials say reports of people sneaking into public forests to illegally saw down firs, cedars and maples are rising.

“It's an economic motive for sure,” said Matt Austin, a B.C. Forests Ministry assistant deputy minister. “These trees can be pretty valuable.”

While the trees may be lucrative on the black market for thieves, they play a more vital stewardship role in the forests, Austin said.

Government natural resource officers have investigated situations where the poachers have caused environmental damage by taking down large Douglas fir or red cedar trees near sensitive waterways, he said.

“These big trees, they're providers of a whole variety of ecosystem benefits in terms of the stability of the banks and riparian areas, the habitat for wildlife, including cavity nesting birds that need these larger trees.”

Austin said he arrived at a scene near Nanaimo on Vancouver Island where a would-be thief cut down a large Douglas fir but it didn't go as planned and the tree was left to rot.

“In this case, the tree had fallen away from the road and just put it in a position where it was going to be really difficult to get it out, so they just walked away,” Austin said.

“I'd say from the end of January to early February, there's one particular area where we noticed a significant increase in timber cutting and obvious theft because there is no authorized cutting in that area,” he said. “It started in one specific area and it kind of quietened down for a couple of weeks and then it popped up again.”

Mason said the trees that were cut down were between 10 and 20 metres tall, but there are also signs of people cutting dead trees, which leads to speculation that people are looking for free firewood.

“My suspicion is given the high price of a cord of firewood and just given the lack of availability in our general area, it is resulting in people going to these open areas and cutting trees for the purposes of firewood,” he said. “On average, I probably get three calls a week, and have for a long time, from people looking for firewood permits.”

The B.C. tree poaching issue has captured the interest of Prof. Terry Sunderland, a tropical forestry expert at the University of B.C.

Sunderland said he is captivated by the similarities of the illegal logging issue in B.C. compared with his studies in countries in west-central Africa.

“It's amazing,” he said. “I'm a professor of tropical forestry at UBC and all the issues I've been dealing with, illegal logging, protected area encroachment, illegal farming, human-wildlife conflict, and I move to Canada and you have these very same issues in a country which is completely different.”

Sunderland said in Africa, people believe they have customary rights to take trees from forests, while in B.C., forests are largely public but subject to strict regulations and permits.

“Here it's an outright case of illegal logging, whether it's for firewood or lumber,” he said.

Sunderland said the high lumber prices are likely driving the thefts, but they've also resulted in the cutting down of other tree species beyond firs and cedar.

“There's been instances of individual maple trees being targeted, particularly the older ones, which have obviously really nice grain and that nice hardwood finish,” he said.

Austin said the large firs and cedars have many uses and can command high prices.

“What I have heard is that there are certain potential unique uses for these trees,” he said. “The big diameters are worth more money not just because there's more wood there, but because you can do larger-dimension things like a table top, or I have heard of a bar top being made.”

He said provincial data over the past dozen years indicates hundreds of tree poaching instances that range from abuse of firewood permits, to cutting outside of permitted logging zones and taking individual trees from parks or Crown forests.

Since 2009, the province has received 1,135 complaints about illegal logging and issued 966 violation tickets that total $123,700, he said. The province has also handed out more than $1 million in administrative penalties for contraventions of authorized harvest permits, said Austin.

The penalties under the Forest and Range Practices Act for being found guilty of damaging or destroying Crown timber include fines of up to $1 million, three years in prison or both, Austin said.

Mason said North Cowichan has stepped up forest patrols in recent months. He said theft of the tree resource is secondary to protection of people.

“Our No. 1 concern is for the safety of the public and even the people committing these acts,' he said. ”Falling trees is an extremely dangerous activity and it's even more dangerous when we've noticed people falling blown-over trees.“

This report by The Canadian Press was first published May 16, 2021.