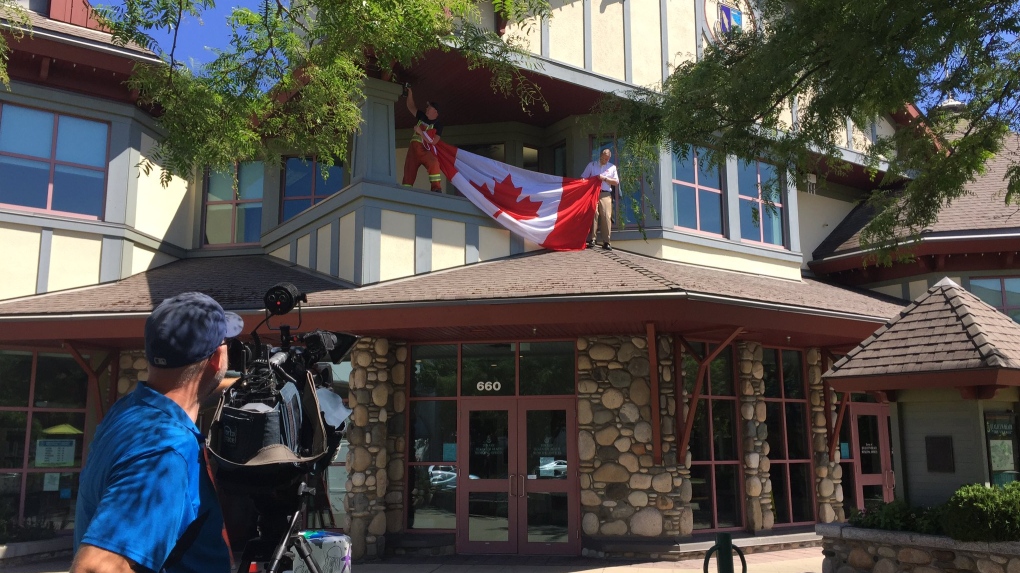 Former Qualicum Beach mayor Teunis Westbroek hangs a Canadian flag from the town hall on June 30, 2017, in solidarity with a senior who was fined for hanging flags of his own. (CTV News)

The town council of Qualicum Beach, B.C., says it decided to take the unusual step of publishing details about why one of its councillors was censured last year, now that the councillor has announced he is running for mayor.

Teunis Westbroek was formally censured by his fellow councillors on Dec. 8, 2021, for "conduct unbecoming of a member of town council."

In a statement published on Sept. 9, the town says its original notice of the censure contained limited details at the request of Westbroek, who had said he planned to retire from public office in October.

However, Westbroek has since announced his bid for the mayor's chair on Oct. 15, which prompted a special meeting of council on Sept. 6.

At the meeting, council voted to disclose more details about the censure of Westbroek, namely that he asked staff "to destroy records, specifically records associated with a previous finding against him, which determined that he had violated the town’s bullying and harassment policy," the town said.

"Council took this matter very seriously and would not have taken such actions over a minor concern," the town added.

"Council assures the community that due process and procedural fairness were followed for the initial censure process in December 2021 and for the process to release further information in September 2022."

Westbroek, when reached at the Union of B.C. Municipalities meeting on Thursday, called the council's decision to release details of his censure "a whole new level of politics than I've experienced" over two decades in civic office.

"I don't know how many times I have apologized," he said. "We've got issues with health care and housing and the environment that we really need to deal with. This is a distraction."

In a statement on his website, Westbroek accuses the town council of playing "political games to restrain him from seeking office."

"My campaign is about the issues which concern the residents of Qualicum Beach today," Westbroek said. "I trust that voters will not be distracted by an unfortunate incident that I have long apologized for in January."

Westbroek goes on to say that while it is true that he "considered retirement" last year, many residents have approached him in the months since and asked him to reconsider.

Westbroek previously served as mayor of Qualicum Beach from 1999 to 2018, when he ran and was elected as councillor.