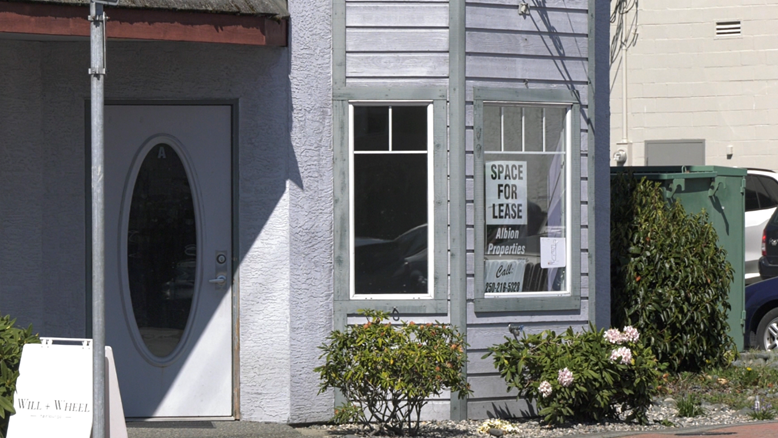 The proposed location of Jima Cannabis on Third Street in Sidney is shown: April 20, 2021 (CTV News)

VICTORIA -- Jima Cannabis is considering its legal options after Sidney council rejected its application to open a recreational cannabis shop in the seaside town.

The company says council has been inconsistent in how it applies the municipality’s guidelines for retail cannabis stores. It says its application was rejected because the guidelines were not clear at the time it was submitted for approval.

“If they were clear, our application would have been different,” said Jima Cannabis president and general manager Jeff Prete. “Based on the motion (by council) to not approve us, we are kind of in a holding pattern because we don’t know why we were rejected.”

Prete says it is unclear if the April 12 vote to reject the proposal to open a shop on Sidney’s Third Street was because it would have been too close to other cannabis retailers or due to other concerns by council. He says despite extensive debate at the council table on the matter, there was no definitive next step for the company to take moving forward.

“We did a lot of research before we submitted our application,” said Prete. “I have over $100,000 invested in this location because I have to do all our prep work, so I’m not going to take 'No' lightly.”

Prete says he needs to understand if Jima Cannabis can apply for another location in Sidney or if the company’s plans to open a shop in the municipality are over.

“I know it is a good community to be in, that’s why I applied here, so not taking, 'No' doesn’t mean I want to go (take legal action), I don’t want to,” said Prete. “I want to have a conversation with town council to understand what’s the interpretation, what’s the real 'why' behind their decision. If I can’t get that conversation, there's that possibility (of legal action), it's within my rights.”

Sidney Mayor Cliff McNeil-Smith says because Jima Cannabis is considering legal action he is unable to comment on council’s decision at this time.

In an emailed statement to CTV News, McNeil-Smith said, “The town adopted a policy for reviewing and considering retail cannabis applications prior to receiving the first of what have now been four applications.”

McNeil-Smith concludes his statement by saying, “Given the feedback Council has received through four retail cannabis applications, Council will now consider amending the guidelines within the policy.”

Prete says prior to council rejecting the proposal for the recreational cannabis shop, town staff had been very helpful in guiding the company through the application process. He hopes that by having a dialogue with Sidney council, he will have a similar experience and the company will no longer need to pursue its legal options.

“It's recoup on investment because it’s definitely not a great way to start a relationship with the town and with the municipality,” said Prete. “I’m not here to pick a fight, I’m here to open up a business and I can’t just walk away without understanding and learning.”