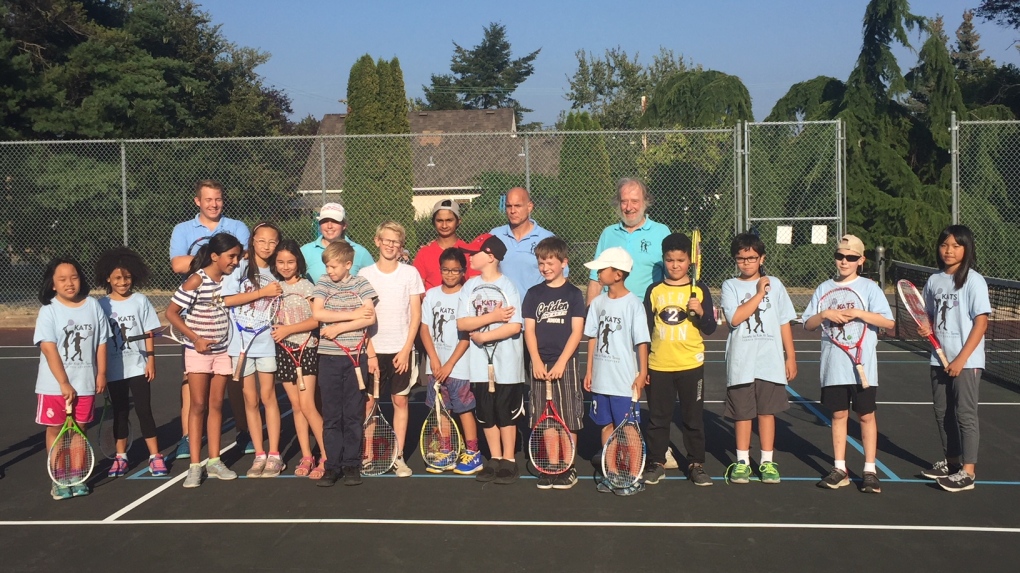 Members of the Society for Kids at Tennis, or KATS, are seen at the Oaklands Tennis Courts in Victoria. KATS provides free tennis lessons, and even racquets if needed, to disadvantaged children. Aug. 16, 2018. (CTV Vancouver Island)

VICTORIA -- The Victoria tennis community is mourning the sudden loss of one of its favorite members and plans to honour him in a fitting way.

Harry Weiler lost his battle to cancer in late July. The avid tennis player could often be found at the tennis courts in Beacon Hill Park playing the sport he loved.

John Miller, a friend and fellow player, says he and many others in the tennis community thought it would be a fitting tribute to hold a charity tennis tournament Weiler’s honour.

All of the proceeds from the event will go to KATS, Society For Kids At Tennis, a charity that Weiler volunteered with and supported.

Weiler’s wife, Laurie, will personally match all donations raised from the tournament.

“It’s a not-for-profit organization that makes tennis available to disadvantaged and low income kids,” Miller says. “They supported it a lot and Harry’s wife decided that would be the charity she would like to support. So instead of a regular entry fee, we are just asking people to make a donation to KATS.”

Recently, health authorities began allowing small-scale tennis tournaments, according to Miller. He worked out a COVID-19 plan with the city and rented courts for a two-day tournament at Hollywood Park.

Due to COVID-19 regulations, tournament draws are limited and the tournament has almost reached capacity, but there are still some spots available.

Those who knew him describe Harry as an exceptional leader, mentor and inspiration. He was also involved in the windsurfing and kitesurfing community.

“We all miss him,” says Miller. “He was a wonderful, decent guy.”

The tournament will be held at Hollywood Park tennis courts in Fairfield this Saturday and Sunday.

If you want more information or want to try and get into one of the few reaming spots in the tournament, contact John Miller by emailing tennisinformation@gmail.com.