Tofurkey isn't the only option for a meat-free Christmas 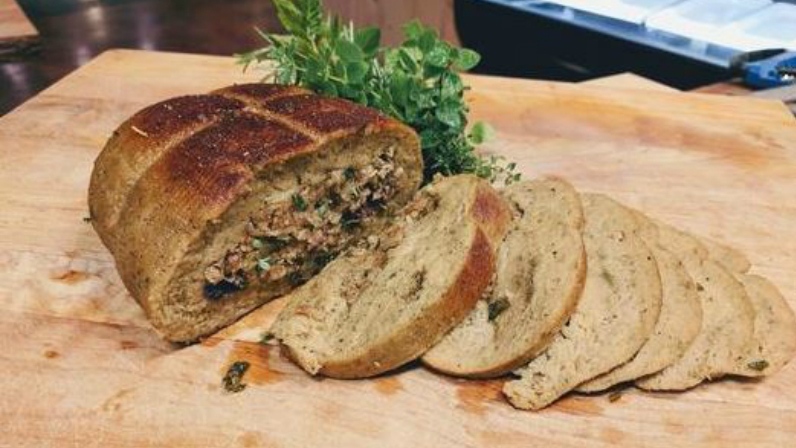 The Very Good Butchers' 'Stuffed Beast,' a turkey substitute made out of chick peas and stuffed with vegetables, is shown. (VeryGoodButchers.com)

Staff at Vancouver Island’s The Very Good Butchers are scrambling to keep up with demand.

The orders for their "Stuffed Beast" have surpassed expectations, and it’s no ordinary stuffed turkey.

"It’s kind of a chicken-turkey style veggie meat that we make out of chick peas, so it’s kind of white in colour and then we make our own hand made stuffing, a bunch of veggies, mushrooms, bread crumbs, cranberries basically what you’d normally stuff your turkey with," said Mitchell Scott, co-founder of the vegan butcher shop.

If you are considering trying a meat-free holiday meal, long gone are the days where the only option was the much maligned Tofurkey.

“There’s a bunch of different options these days that are easily accessible and they’re just as affordable, if not cheaper in many cases, than a full turkey,” said Jordan Reichert with the Vancouver Island Vegan Association.

In addition to specialty shops, most grocery stores now carry vegan holiday goodies, by brands such as Gardein Holiday Roast, and Field Roast.

"The taste is amazing, I think people would actually be blown away by how good the products today are," said Reichert.

The Christmas magic is in the sauce.

“I find the biggest thing people are missing is really what is made up in the sauce, so if you’re doing an alternative to turkey, doing something like having cranberry sauce, having a nice mushroom gravy is an excellent way to get that same flavour,” said Reichert.

There are three main reasons more and more people are opting to go vegetarian or vegan.

Health, the environmental impact of animal farming, and ethical beliefs about animal rights.

As a result, the demand for vegan products is growing.

“Our whole goal I guess is just to provide a healthy really good tasting alternative,” he said.

Reichert said if you want to make it a homemade holiday meal, there are countless recipes, for things like glazed lentil walnut apple loaf, vegan Wellington with mushrooms, lentils and veggies, and roasted stuffed butternut quash.

Ethical and environmental reasons aside, Riechert suggested people could try a vegan spread just to do something different.

“It’s just a really nice way to mix things up because everybody is used to the more traditional Christmas dinner with maybe ham and turkey and such and get people to get out of their comfort zone and try something that maybe they’ll find they really like and enjoy,” he said.

There is one more benefit to a vegeterian or vegan Christmas dinner – no turkey hangover.