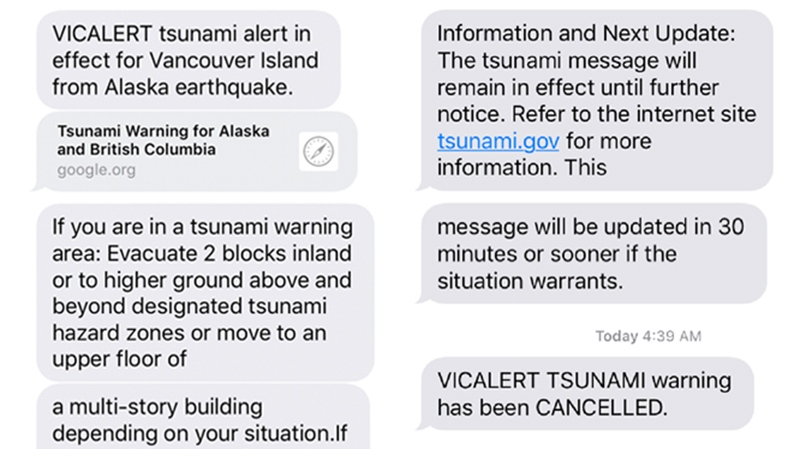 A Vic-Alert text was sent to users warning them of a potential tsunami early Tuesday. The warning was later cancelled. Jan. 23, 2018.

Residents in multiple cities including Victoria woke up to text alerts warning them to get to higher ground after a 7.9-magnitude quake struck off the coast of Alaska early Tuesday. A tsunami warning for most coastal areas of B.C., including the island, was temporarily issued by Environment Canada.

But many others were shocked to wake up after the tsunami warning had already come and gone and wondered how they could stay notified in an emergency event.

Emergency Info B.C. said in the event of a tsunami alert, some cities may activate warning systems while other may just continue to monitor the situation.

It said AlertReady, a province-wide system used to notify local municipalities of emergencies, will include text alerts starting in April 2018.

The City of Victoria said as of Monday morning, some 14,000 new users had signed up for its Vic-Alert service, which texts users in the event of imminent threats and AMBER alerts that affect specific areas of Victoria. By late afternoon, that number had grown to 28,000 sign-ups for a total of 34,156 subscribers.

The sign-up page for Vic-Alert was overwhelmed with the sudden influx of interest, with the city reporting that some had difficulty accessing the page due to the high traffic.

If you are experiencing difficulty accessing the #VicAlert sign-up page, please be patient. We are currently experiencing very high demand. https://t.co/6atZim0UQs

Sidney, North Saanich, Central Saanich, Metchosin and Nanaimo also provide emergency messaging systems for residents. The Town of Sidney said the tsunami warning was a great example of why it's important to sign up for the alerts. The CRD provides similar alerts for electoral areas including the Southern Gulf Islands, which weren't placed under a tsunami warning Tuesday.

This morning's #tsunami advisory is a great example of why we have an emergency notification system for our residents. Sign up now to stay informed during an emergency. https://t.co/O36nNUaFZP

Other municipalities, like Oak Bay, View Royal, Colwood and Esquimalt do not offer mass notification systems but are currently looking into options. Many of those cities recommended residents attend emergency preparedness information sessions, like one being held in Oak Bay at the Monterey Centre on Feb. 21, to learn more about how to be ready in the event of an earthquake or tsunami.

The District of Saanich called it "a bout of good timing" because it was hosting an information session for the Saanich Emergency Program Tuesday night at the Cedar Hill Recreation Centre that would focus on being prepared while learning to assist others in a disaster.