VANCOUVER -- Thousands gathered in Victoria's Centennial Square on Sunday to add their voices to those across North America that have been calling for an end to racism and police brutality.

The rally officially began at 4 p.m., but crowds had already begun to gather more than an hour beforehand.

Many of the protesters came wearing face masks, and organizers said they would be handing out masks to those who didn't have them, as well as encouraging protesters to maintain appropriate physical distance from each other because of the COVID-19 pandemic.

Vanessa Simon, one of the rally's principal organizers, told reporters she understands concerns about mass gatherings, but the cause - sharing the message that black lives matter - is too important for people not to gather.

"We are in the midst of a pandemic," Simon said. "But racism has been a pandemic, and it's been happening for centuries."

Police closed Pandora Avenue as the rally got underway, and Simon said organizers planned to use physical distancing recommendations to their advantage.

Protests have been happening across North America over the last two weeks, since the death of George Floyd at the hands of Minneapolis police late last month.

A rally on Friday in Vancouver drew between 5,000 and 10,000 people to that city's downtown, according to police estimates. While two "instigators" who tried to join that protest were arrested, police said the gathering was peaceful.

Simon said Sunday's protest could have as many as 8,000 participants, or more, based on the number of people saying online that they planned to attend.

Most of the rallies across Canada have remained peaceful, while rallies in the United States have seen police use tear gas and rubber bullets to disperse crowds, as well as looting and arson in some cities.

Simon said it's important to hold protests like Sunday's in Victoria so that people realize the city does have a Black population, and that population does face the same issues of systemic racism seen elsewhere in North America.

"I feel Canadians feel that racism doesn't happen here, and it does," Simon said. "The thing is, it's more covert than overt. People aren't dying in the streets, but people are dying behind closed doors."

Fellow organizer Pamphinette Buisa echoed that sentiment. A rugby player for Team Canada, she said she never thought she'd be leading a protest movement, but after the cancellation of this year's Olympics, she felt it was important to use her platform to speak up.

A massive crowd of people have gathered in Centennial Square, overflowing into the road for a peaceful rally against anti-black racism. 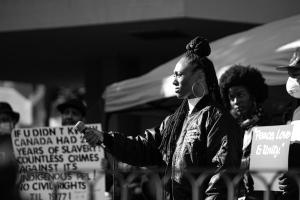