An unusual sight in the skies over Vancouver Island on Saturday sparked conspiracy theories online. A group of jets left exhaust trails in a formation, leading to theories that ranged from weather-altering flights to signs of Russian aggression.

Wendy Brown was riding a transit bus heading to Langford when she noticed contrails being left in the sky.

"I figured it was aircraft, it was just the way they crossed each other," she said. "I thought that was strange, I immediately pulled my phone out and started recording."

She didn’t think too much about it until she saw postings on Facebook by people trying to figure out what would have caused the trails. That’s when she posted a video she had taken on the bus.

"I was like, this is really strange, I definitely knew it wasn’t those big airplanes but it was pretty interesting to see," she told CTV News.

"Not a cloud in the sky, and obviously you could see the trails of the planes flying in formation quite high," he said. "They just came right across the skyline over the lake."

"There was an airline flight that was travelling head on with them and they were below that airline because you could see that trail in the sky as well," he said. 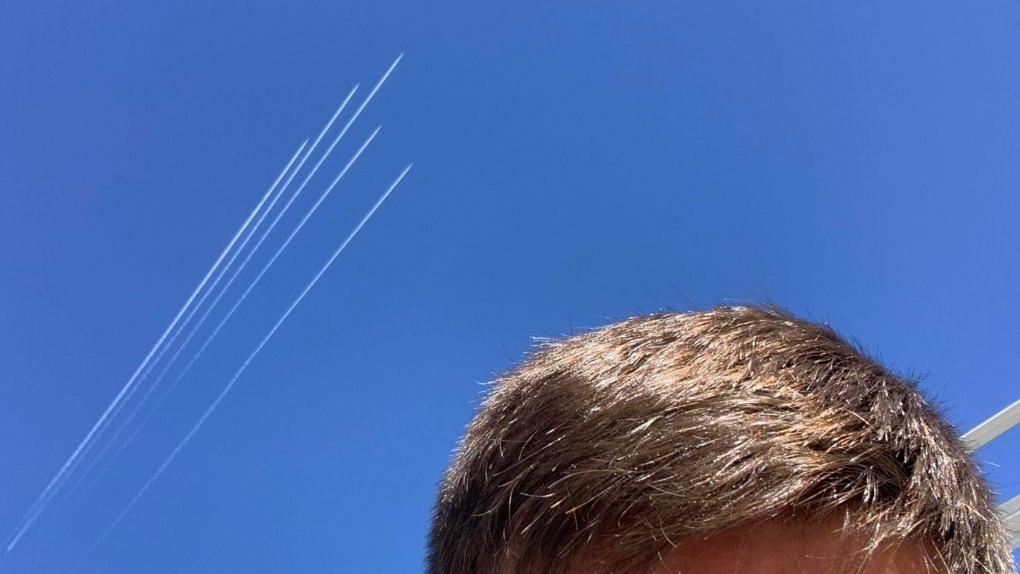 Alexander assumed the trails were left by a military group of planes, while some others speculated that the Snowbirds were the cause, though the Canadian aerobatics team is currently grounded due to ejection seat concerns.

The sighting had all the appearances of commercial aircraft flying in formation at a high altitude, yet none of them were visible on services such as flightradar24.com or flightaware.com

The answer to the mystery is in fact military aircraft, but their origin was American, not Canadian.

Twitter account Evergreen Intel monitors military aircraft and began posting thoughts about which planes could have left the trails over Vancouver Island.

The woman who runs the account tells CTV News that she first spotted the formation in Washington state while driving home from work and pulled over to start grabbing some photographs.

She says she immediately recognized the formation as similar to aircraft being in Alaska for Red Flag 2021, an exercise in Alaska involving F-35s in high altitude patterns.

In this case, though, she believes they were five F-15Es. 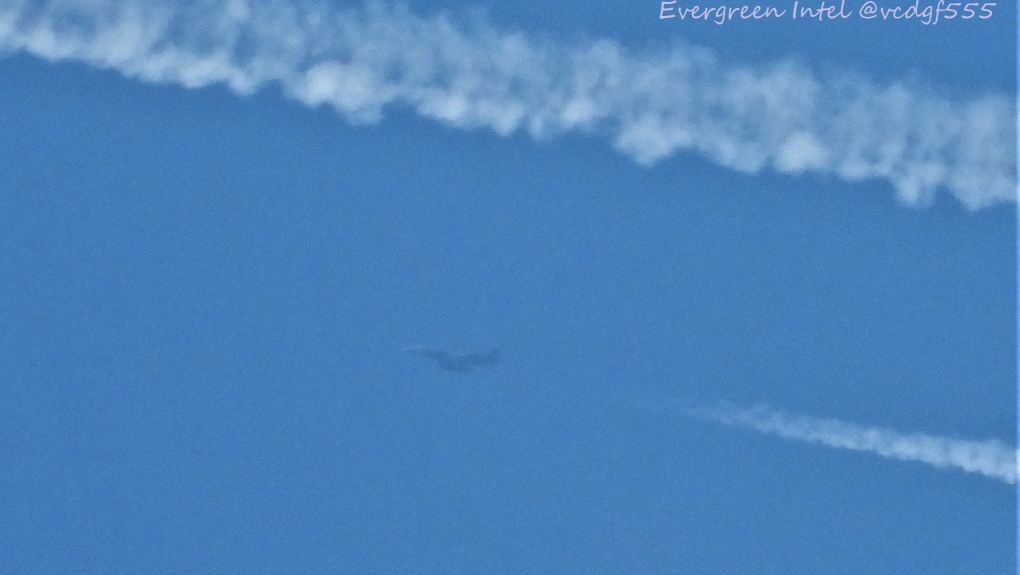 One of the five U.S. F-15E fighter jets is pictured. (Evergreen Intel/@vcdgf555)

"Shapes match, twin-tailed, also the distinct lack of noise because they were so high up. The weather at the time had no clouds in the sky and high pressure building for a warm summer day," she said.

The acting Wing Public Affairs Officer for the Canadian Forces Base in Comox confirms those aircraft being over the island.

"The jets didn’t land here so it is assumed that their tanker showed up as expected," he said.

Little says it’s not uncommon for American fighters to travel over Vancouver Island when going between bases in Alaska and the lower 48 states.

Ian Petchenik, director of communications for Flightradar24, says it's not uncommon to see military planes flying in formation along the coast.

"In most cases when there’s a visible formation flight, what it usually is is a transiting military flight, so flying from one base to another, and that often won’t appear on our service," he said.

Petchenik says in other cases though, the lead flight of the formation may appear.

"Usually the lead aircraft in that flight will switch on their transponder if it’s available and then they’ll announce themselves to air traffic control as whatever their call sign is, flight of, and then how many aircraft are there," he said.

Evergreen Intel says her Twitter account was created to focus on publicly available data on various aircraft and ships in Washington state and around the world.

She says given recent world events, she understands why there would be extra concerns.

"I would not doubt that many people are seeing out of the ordinary things and wonder what is up and whether they pertain to anything about recent events," she said.

Intel says the clear weather on the weekend also allowed her to capture other images of aircraft returning from the exercise, including a Sentry AWACS.

"I’m sure there are a lot of people spooked right now with our tensions with Russia, which is why I am happy to ease fears about things like this when I see them," she said.

Flightradar24.com is one of a handful of similar sites enabling the curious to see where flights around the world are originating from and heading to.

The site, based in Stockholm receives about three million visits every day and says Canada ranks 12th in terms of visits this year.

"Some folks, it’s aviation enthusiasts who spend a lot of time on the site because they’re very interested in various aspects of the aviation industry," said Petchenik.

"Other times it’s folks who are tracking a specific flight, it can be anything as simple as, 'I ordered something and I know it’s shipped and I’m following the flight,' or 'Grandma is coming to visit and we’re following her flight,' things like that," he said.

An earlier version of this article incorrectly identified the gender of the Evergreen Intel Twitter account user.

A new study has found that more than half of people infected with the Omicron variant of COVID-19 were unaware they had it. Undiagnosed infections could be the reason why the variant spread so rapidly, according to researchers.

The next phase of Ontario's "Plan to Stay Open" involves transferring of seniors from hospital to alternative long-term care homes, the hiring of thousands of health-care workers and a pledge to reduce surgical backlog.

As a potential power broker, Turkish President Recep Tayyip Erdogan will use his first visit to Ukraine since the war started nearly six months ago to seek ways to expand the export of grain from Europe's breadbasket to the world's needy. UN Secretary-General Antonio Guterres will use his visit to focus on containing the volatile situation at a Russian-occupied nuclear power plant.

Finland's prime minister says she did not take any drugs during a 'wild' party in a private home, adding she did nothing wrong when letting her hair down and partying with friends.

New Zealand police have launched a homicide investigation after the remains of two children were found in suitcases bought by a family at an online auction, police said Thursday.

Japan wants young people to drink more alcohol. It's just not sure how to convince them

The Japanese government has been hit in the pocket by an unusual problem -- its young people aren't drinking enough.

A discovery by a team of B.C. researchers may lead to improved COVID-19 treatment options that are effective against several variants of the disease.