'There'll be nothing left to protect': Protesters call on B.C. government to stop old-growth logging 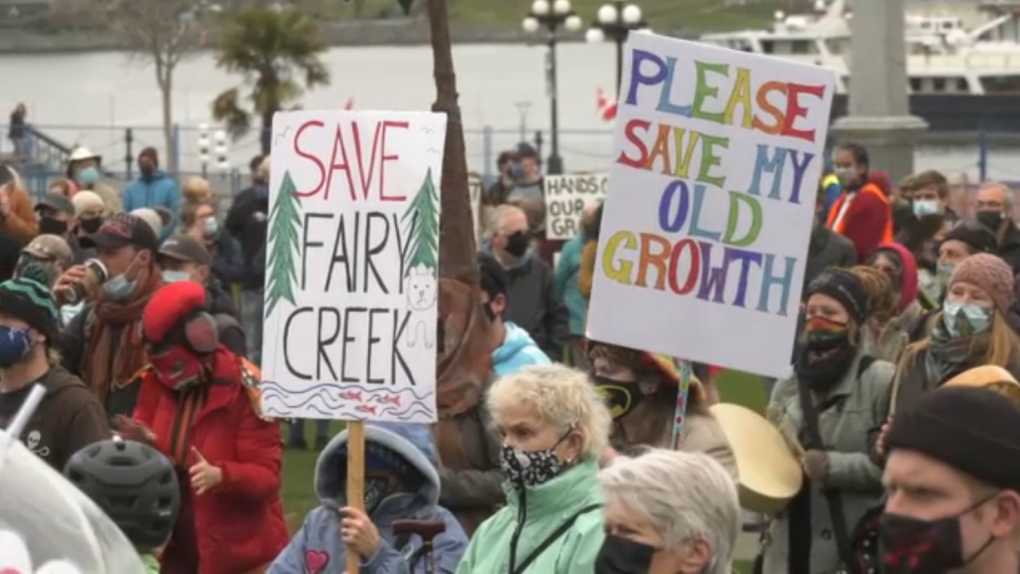 Protesters gathered at the B.C. legislature in downtown Victoria Saturday to call for an end to old-growth logging in the province. (CTV)

VANCOUVER -- Protesters gathered at the B.C. legislature in downtown Victoria Saturday to call for an end to old-growth logging in the province.

Hundreds of people stood on the lawn of the legislature, most wearing face masks and maintaining some physical distance from others, to listen to speakers from environmental groups and local First Nations.

The gathering comes as the B.C. Supreme Court prepares to make a decision on a logging company's request for an injunction against activists and Pacheedaht First Nation members who have set up blockades in an old-growth forest near Port Renfrew.

Bobby Arbess is a member of the Rainforest Flying Squad, one of the organizers of the event and of the blockade at Fairy Creek, located about 30 minutes northwest of Port Renfrew.

Arbess described the rally as a protest against Teal Jones Group, the logging company seeking the injunction, as well as the BC NDP government, which he said has not acted quickly enough on a campaign promise to protect old-growth forests.

"There'll be nothing left to protect by the time they get around to rolling out their policy into legislation," Arbess told CTV News Vancouver Island.

He said old-growth forests are important and rare habitats for wildlife that also play a key role in trapping and storing carbon emissions.

When the blockade began in mid-August, it was a "last-ditch effort" to prevent Teal Jones from building roads into the Fairy Creek watershed, Arbess said.

"We didn't expect that we would still be on the blockades eight months later, but here we are," he said. "We've essentially triggered a broad-based, grassroots movement to ramp up pressure on the provincial government to bring an end to the era of old-growth logging here in British Columbia."

Ahead of the event, Victoria police said they anticipated possible traffic disruptions between 11 a.m. and 2:30 p.m. as protesters gathered and then marched through downtown.

"VicPD officers will be on site to ensure everyone's safety," the department said in a news release Friday.

"The public health officer recognizes the Charter right to peaceful assembly and is not prohibiting outdoor assemblies for the purpose of communicating on a matter of public interest, provided steps are being taken to limit the risk of transmission of COVID-19," police continued. "Participants and organizers are reminded of their responsibilities in planning and organizing events."

At the same time as the Victoria event, protesters affiliated with Extinction Rebellion staged a sit-in on the Cambie Street Bridge in downtown Vancouver.

Organizers said the Vancouver protest, which began with a march from city hall to the bridge, was intended to call attention to the Fairy Creek blockade and old-growth logging in B.C., as well as to demand further government action on climate change.