'There could've been people inside': Sooke building burned in suspicious fire was days away from demolition

An excavator is pulling down what’s left of an old, familiar landmark in Sooke – after the former Mulligan’s Bar and Grill site was torched in a fire early Wednesday morning.

Firefighters rushed to the property at 2197 Otter Point Rd. around 5:30 a.m., finding lots of flames and one bit of relief.

"But we confirmed there wasn’t and that was the main thing," he said. 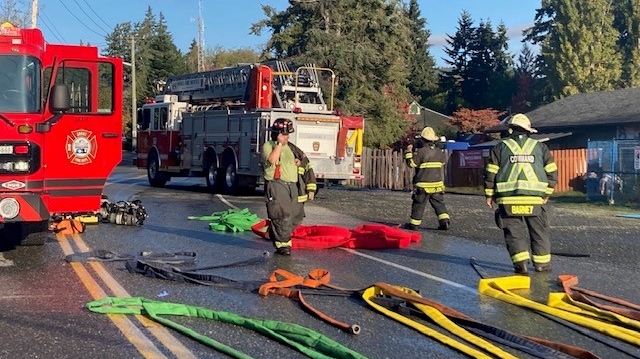 The property, which was the former location of Mulligan's Bar and Grill until 2012, later served as a homeless shelter, and was vacant and slated for demolition and redevelopment at the time of the fire.

"Everyone’s talking about it," said Sooke resident Maggie Evans, who learned about the fire on social media when she woke up.

She was staying at a friend’s house nearby and says she was surprised they didn’t hear the sirens.

"I couldn’t even believe that it was a true story, but here we are," said Evans’ friend, Krista Schley.

Police are standing by, ready to pick up the investigation, because fire officials believe the cause of the fire is suspicious.

"We have evidence that there was forced entry into the structure and then, of course, there’s no power," said the deputy fire chief.

"There’s no utility going to the building. It’s been vacant for quite a long time," he added.

Sooke RCMP say an arson investigation is underway, though it's still in its early stages.

Bill Foster is a listed property owner for the land. He says they recently took their insurance off the property upon completion of hazmat removal.

Foster says they were getting ready for a demolition that was just days away.

"It basically is going to cost a bit more money to demo it than was already planned," he said.

There are plans to redevelop the land for housing and commercial space.

The road was closed around the property for hours as firefighters worked to extinguish the fire and the excavator worked to take down the remainder of the burnt building.

Sooke RCMP say that Wednesday's fire is the fourth suspicious fire to occur within the District of Sooke over the last two months.

Police say that each of the fires were set in a "similar geographic area," within walking distance of Sooke's downtown core.

The first two fires were lit at an unoccupied structure on Eustace Road on Aug. 11 and again on Sept. 18.

The third suspicious fire affected a derelict vehicle at an abandoned residence on Townsend Road on Sept. 27, according to police.

"Clearly a pattern of suspicious fires has been established and investigators are working to identify a suspect and, in turn, prevent further person-caused fires in our community," said Sgt. Kevin Shaw, operations commander for the Sooke RCMP in a release.

"Each fire has been reported in the late night or early morning hours, and the Sooke RCMP encourage members of the public to report any information about the fires, or any suspicious activities to the Sooke RCMP," he said. "While each of these fires have involved unoccupied property, they still pose an obvious risk to the public and to the emergency services called to respond."