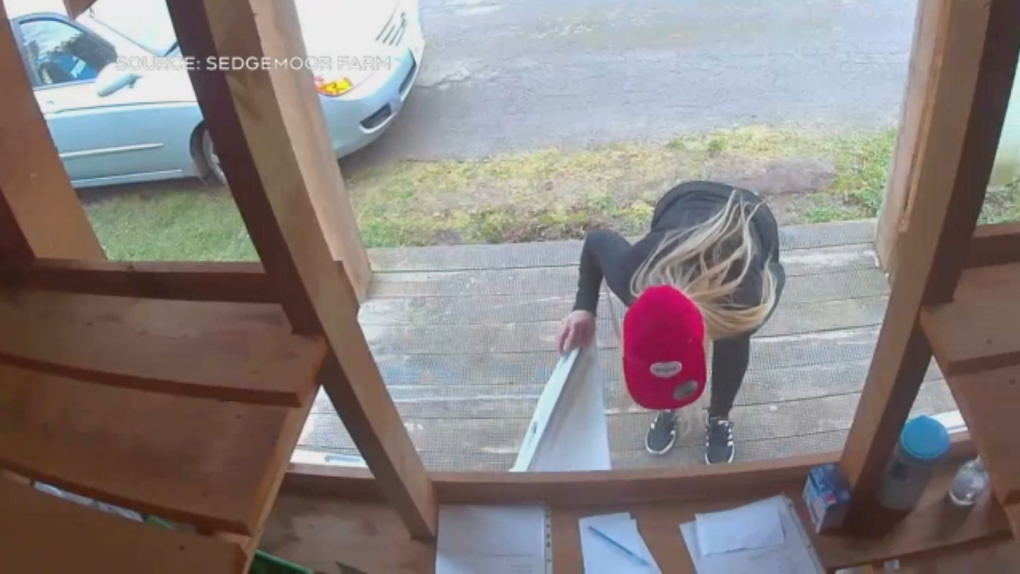 The suspected thief was captured on surveillance video. She can be seen taking meat out of the stand's refrigerator, at one point gesturing back to a vehicle waiting on the roadside. (Sedgemoor Farm/Facebook)

VANCOUVER -- The owners of a Vancouver Island farm say they hope a recent theft from their farm stand won't end up ruining the honour-system business for everyone.

Recently, Sedgemoor Farm on Menzies Road had more than $100 worth of food stolen from its roadside stand.

The suspected thief was captured on surveillance video. She can be seen taking meat out of the stand's refrigerator, at one point gesturing back to a vehicle waiting on the roadside.

In the video, the woman is wearing a red baseball cap over her long blond hair. She has black pants and a black shirt on.

At first, the farm's owners hoped the alleged thief would send them an e-transfer for the cost of the meat, greens and bread she took. That hasn't happened, according to Sedgemoor Farm co-owner Vicki Janse.

"The person had no indication of taking any information down to complete an e-transfer or even use her phone," Janse told CTV News Vancouver Island.

She called the incident "a significant loss" for the farm, but said she's hopeful that it won't become a regular occurrence.

"We were quite annoyed, for sure," Janse said. "But we know that that is not the majority of people who do business with us."

A rash of similar thefts happened back in September, and North Cowichan/Duncan RCMP say they've made arrests for similar crimes in the past.

It's not clear if the latest theft is related to previous incidents, police said.