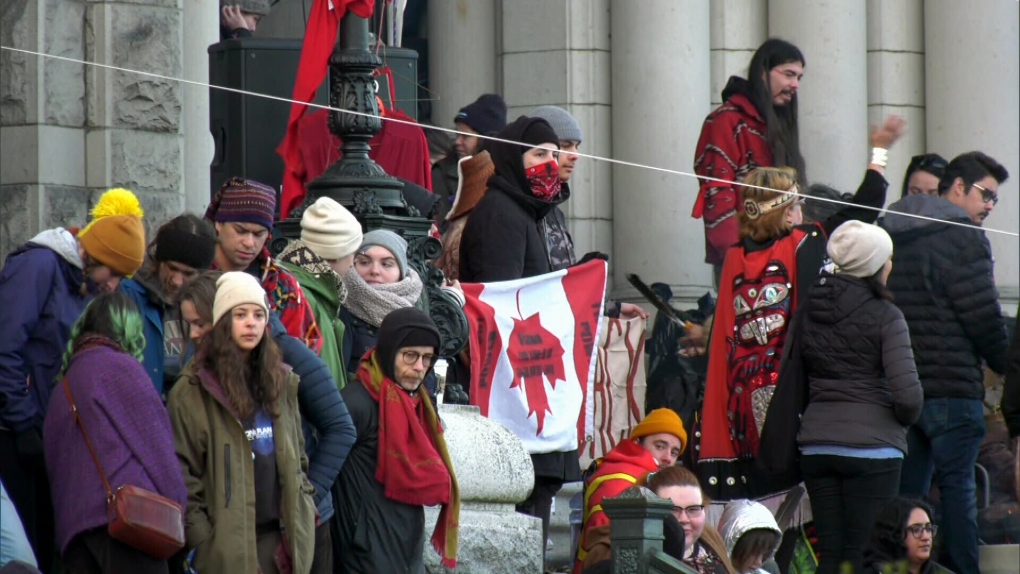 A protest at the B.C. legislature continued into the afternoon Tuesday. (CTV News)

OTTAWA -- Here is the latest news on protests across Canada over a natural gas pipeline project in British Columbia:

The federal agriculture minister is indicating that help could soon be on the way for farmers impacted by barricades that have virtually shut down Canada's rail network.

Marie-Claude Bibeau says 2019 and the beginning of this year have been difficult for Canada's agriculture sector.

She told reporters in Ottawa today that she is looking for “practical ways” to support farmers who have been unable to get their products to market as a result of the barricades, but could not elaborate, saying she needs to speak with her cabinet colleagues first.

Rail and road barricades have been erected in several locations across the country over the last two weeks in solidarity with the hereditary leaders of the Wet'suwet'en First Nation, who oppose a pipeline project on their territory in northwestern B.C.

The RCMP confirms the commander of the Mountie's British Columbia division has sent a letter to Wet'suwet'en hereditary chiefs, agreeing to discuss the future of a small contingent of officers stationed on traditional First Nation territory near the site of a disputed pipeline.

The letter from Deputy Commissioner Jennifer Strachan says she is willing to meet with the chiefs to discuss what she calls the Community Industry Safety Office, located southwest of Houston along a road leading to the area where the Coastal GasLink pipeline is under construction.

Staff Sgt. Janelle Shoihet says the letter states that if there is continued commitment to keep the road open, the need for the police presence is “diminished or decreased.”

She says Strachan also sent an internal memo to all RCMP employees in B.C., offering her appreciation for their “professionalism” during recent enforcement of a court injunction ordering demonstrators away from the pipeline site.

The memo tells members that management is aware the presence of the RCMP contingent on the road is considered by hereditary chiefs as a barrier to further dialogue, and RCMP management supports efforts now underway to find a long-term solution to the issue.

Quebec Premier Francois Legault says police will dismantle a rail blockade in St-Lambert, south of Montreal, if a court grants an injunction.

He says the blockade that went up Wednesday is not on First Nations land, making it easier to take action.

The blockade in solidarity with Wet'suwet'en hereditary chiefs in British Columbia was erected on CN tracks, and has disrupted rail service for suburban commuters and travellers between Montreal and Quebec City.

A few dozen protesters, well stocked with supplies, tents, camping gear and firewood, are at the site today and say they plan to stay as long as RCMP remain on Wet'suwet'en lands.

Snow has been piled onto tracks, with signs strung across a cord hung between rail signals.

Protesters, who declined to give their names to reporters, describe themselves as supporters of the Wet'suwet'en and say they will take their direction from the B.C. First Nation's hereditary chiefs, who are contesting the Coastal GasLink pipeline project.

Conservative leadership candidate Erin O'Toole says he would criminalize blockades of railways, air and seaports, major roads, businesses and households if he were prime minister.

The Ontario MP and former cabinet minister says police should clear blockades as soon as possible without having to wait for court injunctions.

Blockades set up in support of Indigenous protests of a natural-gas pipeline in British Columbia have halted rail traffic in Central Canada and temporarily blocked roads and bridges in spots across the country.

O'Toole also says he would take charitable status away from any group that accepts foreign contributions and encourages blockades.

To improve relations with Indigenous Peoples, O'Toole says he would fund an Aboriginal liaison officers in the RCMP.

Federal Public Safety Minister Bill Blair says the RCMP have offered to move officers away from the area where traditional leaders of the Wet'suwet'en First Nation have been opposing a pipeline on their territory.

Blair says that meets the conditions set by the chiefs, who have demanded that Mounties leave their traditional lands southwest of Houston, B.C.

But yesterday Chief Na'moks, one of five hereditary clan chiefs who lead the First Nation under its traditional form of governance, said pipeline builder Coastal GasLink must also pull out of the traditional territory before any meeting with provincial and federal politicians can proceed.

Canada's minister in charge of Indigenous relations, Carolyn Bennett, and her B.C. counterpart Scott Fraser are in northern B.C. to meet with any of the hereditary chiefs who might be willing to talk.

Na'moks, who also goes by John Ridsdale, said he is attending a funeral and is unavailable to meet today, while the other four hereditary chiefs are expected in Mohawk territory to thank members of that Ontario First Nation for their solidarity.

Nationwide protests and blockades followed a move by RCMP to enforce a court injunction earlier this month against the hereditary chiefs and their supporters, who had been obstructing an access road to the company's work site.

This report by The Canadian Press was first published Feb. 20, 2020.