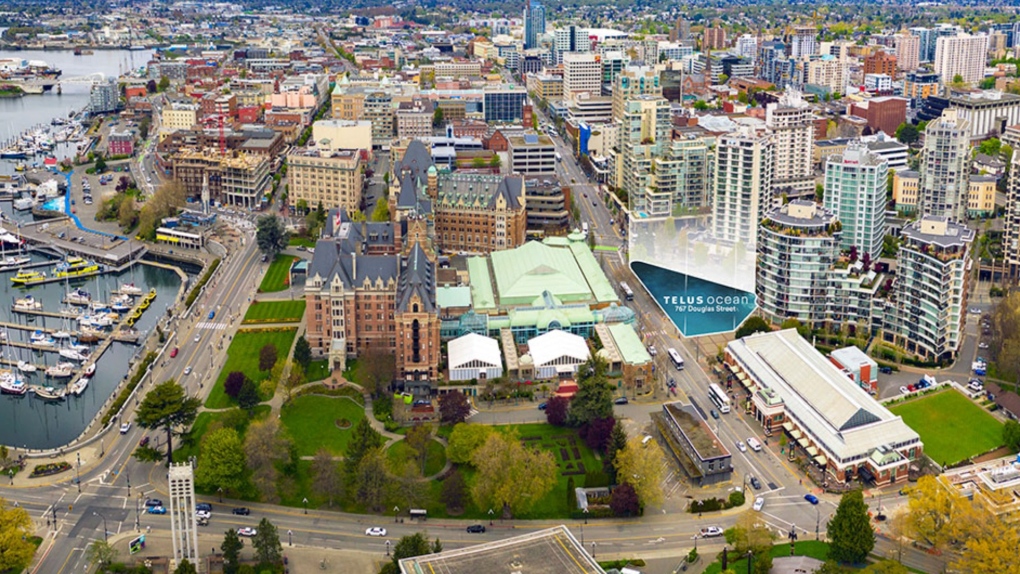 The proposed Telus Ocean office and retail building will become the company’s regional headquarters for approximately 250 employees, according to the city. (Telus)

The city announced Tuesday the Telus Ocean development, which will be housed on the former “Apex” site at 749-767 Douglas St., on the corner of Humboldt Street.

Telus agreed to buy the property from the city for $8.1 million, plus an additional $1.1 million adjustment depending on the final project proposal.

The proposed office and retail building will become the company’s regional headquarters for approximately 250 employees, according to the city.

While the communications provider will occupy most of the new building, some office, retail and restaurant space will also be open for lease.

“This significant investment by Telus is a next-generation project that helps bring the city’s draft recovery, reinvention and resilience plan, Victoria 3.0, to life,” Victoria Mayor Lisa Helps said in a statement Tuesday.

“It is another example of the confidence leading companies are showing in moving to Victoria or expanding their operations here. This major new business and innovation centre will create significant long-term economic and community benefits, pump added vitality and diversity into the heart of our downtown commercial district and support hundreds of new family-sustaining jobs.”

Telus will partner with Victoria-based Aryze Developments for what the city says will be an “architecturally significant” building.

Community engagement on the project is expected to begin later this month. The city says the project will also create new opportunities for the Victoria Conference Centre.

The city is expected to contribute $2.37 million to cover environmental and geotechnical costs to remediate the site.

Two car rental companies currently operate on the property, a 27,790-square-foot triangular parcel that was created as part of the original infilling of James Bay in the early 1900s.