The Dumpling Drop restaurant in downtown Victoria is now take-out only, for the foreseeable future.

Owner Tarn Tayanunth says the decision to go take-out only was made in order to keep her staff healthy and feeling comfortable coming into work everyday.

"Why wouldn’t we do our best to try to protect the people that I love, who work for me?" she said.

Her employees seem to agree.

"I think everyone at work feels a lot safer for sure," said Shelly Molloi, who works at the eatery.

It’s not a small operation with 25 employees, but the restaurant's footprint is, making this pivot possible without doing too much damage to the bottom line.

"It doesn’t take much away from us really," said Tayanunth. "At this point we only have two tables and four seats at the bar so it’s not a lot." 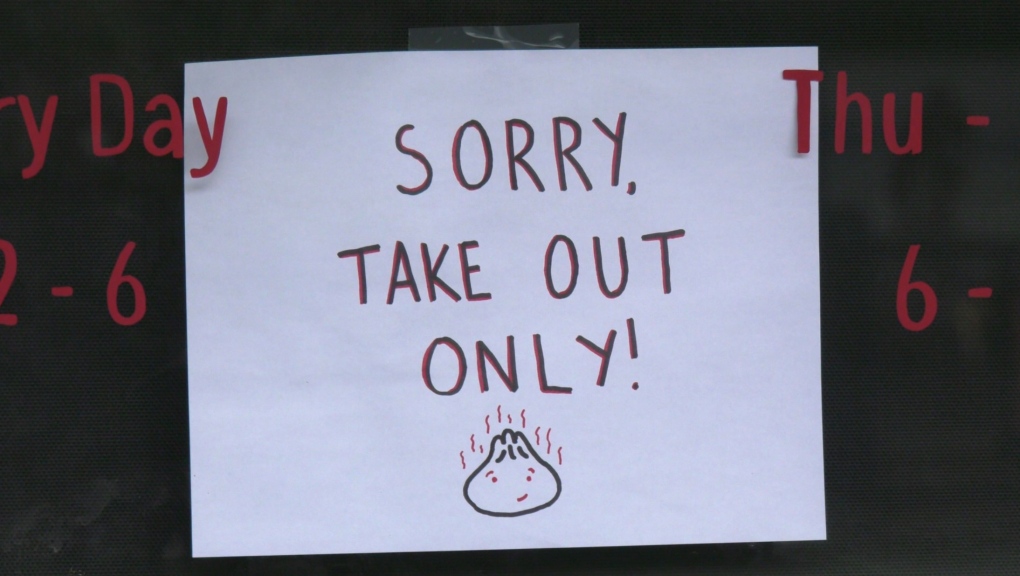 A sign posted on the front door of Dumpling Drop in downtown Victoria is shown: Jan. 13 2022 (CTV News)

But not all restaurants can go down this path as the Omicron variant of COVID-19 makes its way through the community and workplaces.

Romeo’s Restaurant and Lounge on Hillside Avenue is a 6,000-square foot establishment with a 180-seat dinning room. Towards the start of the pandemic, general manager Christopher Mavrikos built a take-out window, and he says it’s getting his restaurant through the pandemic.

"You're socially distanced through the queue here, they come up to the window and they pay," said Mavrikos. "Then they come around the corner and a team member hands them their order and away they go."

There are still struggles though.

Mavrikos says dine-in business was good heading into the Christmas break. Then the province announced new restrictions on Dec. 22, which once again created capacity issues.

Only six people are currently allowed per table at restaurants in B.C., and each table must be spaced apart.

Not all restaurants have been able to weather the storm.

"We’re short-staffed, we know that," said Ian Tostenson, president and CEO of the British Columbia Restaurant and Food Services Association.

"I mean, we’ve had a shortage of staff even before the pandemic."

Tostenson says the industry is currently short around 40,000 workers.

He says January is typically the slowest month of the year for restaurants, but the retention of current staff is extremely important right now.

"It’s not far until we’re in patio season and we need staff," said Tostenson.

By the time warmer seasons return and restaurants ramp back up, hopefully Omicron infections will have subsided.

"We feel very fortunate to be able to do this and still run the restaurant," said the Dumpling Drop owner.