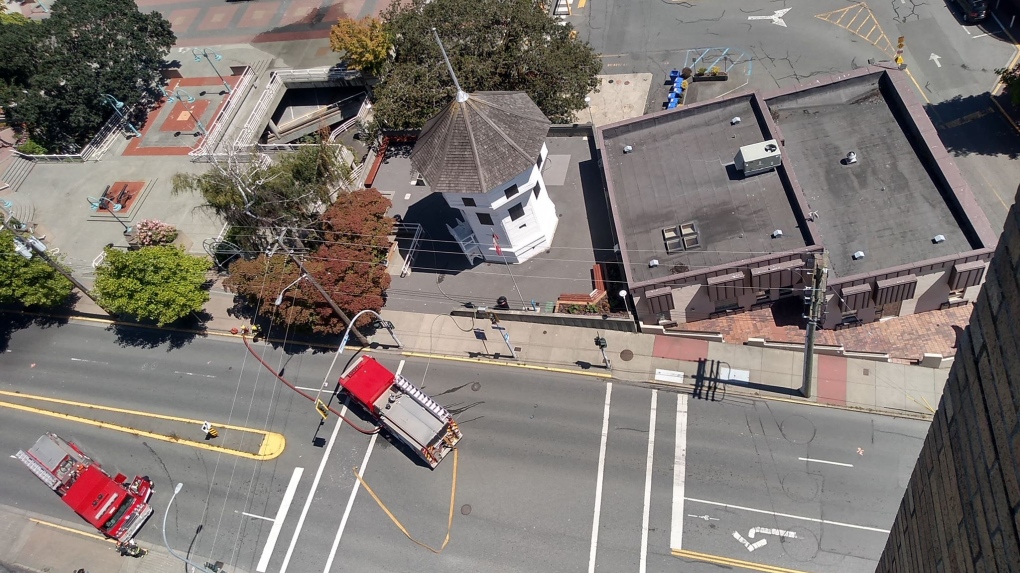 VICTORIA -- Tensions ran high when Nanaimo firefighters were called to an iconic building where a stockpile of gunpowder is kept on Monday.

At around 12:30 p.m., Nanaimo Fire and Rescue were called to reports of a small blaze at The Bastion building in downtown Nanaimo.

The cylindrical building is a historic centrepiece of the city. It was once used as a lookout for ships and housed cannons to protect from unwelcome visitors.

To this day, a cannon is still fired in Nanaimo as a summer tourist attraction.

Firefighters say there was some concern when the call came in as they knew that gunpowder is still housed in the basement of the building.

"Upon initial call it (was) concerning that it's The Bastion and we know there is gunpowder down there," Nanaimo assistant fire chief Jodi Le Masurier told CTV News.

Fire crews found a small fire at the rear basement entrance of the building. The rear door was badly damaged, and fire was able to inch its way into the building and charred a small area inside as well.

Quickly, fire crews doused the flames and were able to calm any fears that the fire might have ignited a large cache of gunpowder.

The fire, however, is considered suspicious.

"We've deemed that it's suspicious," Le Masurier said. "It looks like some debris was lit, but it's under investigation."

With the fire considered suspicious, the Nanaimo RCMP is now the lead organization looking into the cause of the fire.

Fire damage was contained mainly to the back door and a nearby section inside. Crews on scene said there was minor smoke damage inside as well.