Police are calling a massive overnight fire that destroyed an unoccupied Nanaimo pub known for its role in a recent Superman movie “suspicious.”

Fire crews got a call just after 11 p.m. Monday for reports of smoke coming from the historic Cassidy Inn Pub on Highway One.

It wasn’t a large fire when they arrived, but the aging building hampered their efforts and flames spread rapidly.

“The age of the construction, multiple renovations; it was very difficult to gain access,” said Cranberry Fire Capt. Garry Hein.

Crews attacked the blaze from outside, but huge flames quickly consumed the building and Hein said it became a “total loss.”

Photographer Nicholas Boyle happened to be driving through the area after work and said he got out of his car to snap some stunning pictures of the fire.

“All of a sudden it just went up. The flames just started billowing. It became an inferno, then the firefighters stood back and just watched it go, and that’s when I got some of my best photos,” he said. “I think it was amazing how they contained the blaze so quickly…I just was in awe of the firefighters and the work that they were doing.”

The building was said to be nearly a century old and was well-known for being used as a filming location for the Superman movie "Man of Steel."

Hein said squatters are known to set up camp near the inn, but it doesn’t appear anyone was inside at the time and there were no reports of any injuries.

The building was slated for demolition by the Regional District of Nanaimo, Hein said, and it was not connected to any power source.

The building was slated for demolition by the Regional District of Nanaimo for being a fire risk, and it was not connected to any power source.

Last week, the current owner of the building was given a 30-day extension to secure the property and address conditions.

Crews were expected to put out hot spots throughout the day as the fire continues to be investigated by Vancouver Island RCMP.

The cause of the blaze remains undetermined and RCMP are asking anyone with information to call them.

Smoke coming from the now burned down Cassidy Inn s/o #Nanaimo after a fire this morning @CTVNewsAndy pic.twitter.com/AOhtBXoDsO 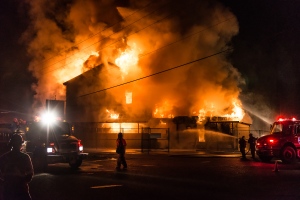