Supporters of abused Duncan dog 'Teddy' rally outside of court 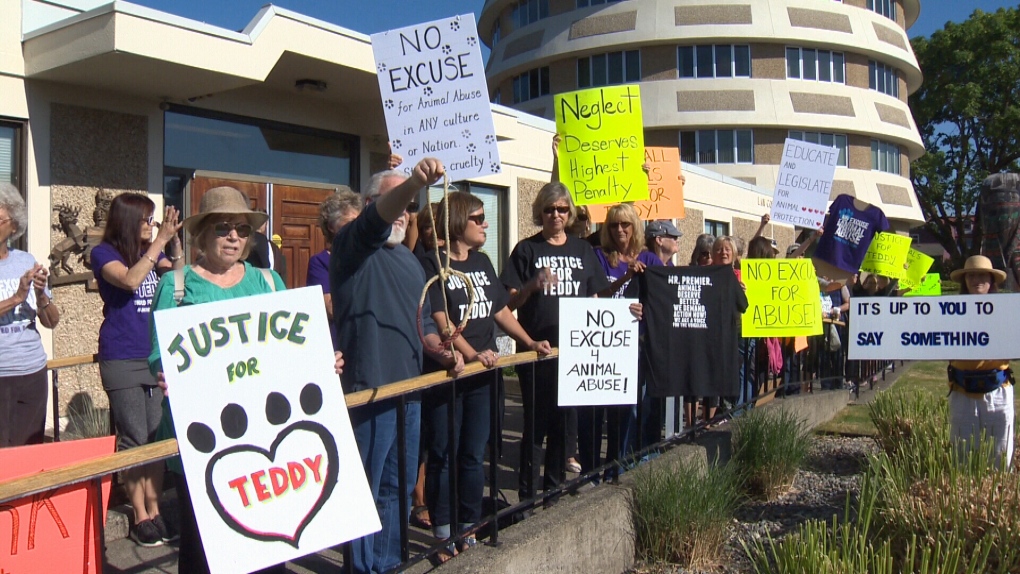 Animal lovers rallied outside of the Duncan Courthouse for an abused dog whose former owners made a court appearance Tuesday.

Teddy, a severely emaciated and infected dog, was seized by BC SPCA constables from a Duncan property on Feb. 16, 2018.

He was found on a short chain standing in a pile of mud and feces, the BC SPCA said at the time.

His wounds were so infected that his head became grotesquely swollen, and he succumbed to his injuries days after he was seized.

The dog's owners, Anderson Joe and Melissa Tooshley, are each charged with animal cruelty and appeared in court Tuesday – but the case was adjourned.

Protesters outside the building chanted and hoisted signs with messages like "No Excuse 4 Animal Abuse" and "Justice For Teddy."

The group said the fact that the case was adjourned won't stop them from coming back and protesting again.

"This one is not going away because we're going to make an example of this one so that our judicial system takes this serious," said Rena Van Steele.

Protesters have previously gathered at the BC Legislature for a candlelight vigil and to call on the government for strengthened protections for animals in the province.

"It's a lot more frustrating this time that they let us all show up and start to advocate, only to tell us to go right back home, and this is the third time that it's been adjourned," said Jesse Adams. "Showing basically to the people that they truly don't care with trying to go forward with justice, and they're just trying to water down this case to be forgotten like all the others."

Tooshley and Joe are scheduled to be back in court on June 5.