VICTORIA -- Several people took part in a dramatic rescue of more than 15 dolphins that were stranded onshore near Powell River after being chased onto land by a group of predatory orcas.

The rescue took place Monday, according to Susan MacKay, founder of Whales and Dolphins BC, a publication of the Wild Ocean Whale Society.

MacKay says she and roughly 19 other people noticed a group of 16 Pacific white-sided dolphins stranded in an old fishing trap close to shore.

The rescuers believe that the dolphins wound up in the trap after being pushed onto shore by a pod of predatory transient orcas that were attempting to herd the dolphins.

“The orca literally pushed them in closer and closer to shore,” MacKay told CTV News. “The orca was waiting all day, back and forth, as the dolphins were close to shore."

“I was concerned that the dolphins might possibly wind up stranded because the orcas were just relentless. They just hung in there.”

MacKay says that the orcas stalked the dolphins until it was clear they were stranded, unable to move because the tide had pulled away from shore.

MacKay says that once it became clear that the dolphins were stuck, people nearby rushed to help return the marine mammals to the ocean. Once the people became involved, many of them members of a local First Nation, the orcas appeared to lose interest and swim away, according to MacKay. 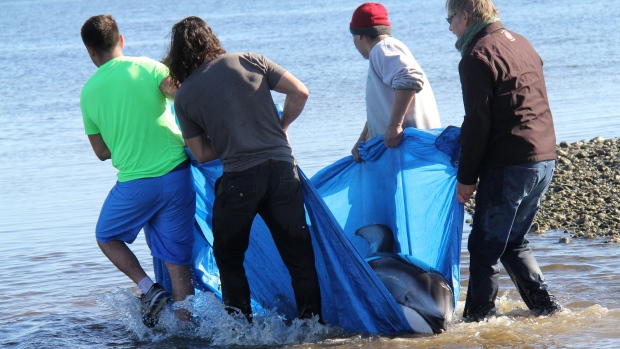 “Some of the First Nations people jumped in and started getting the dolphins out,” said MacKay.

“Originally there was a little bit more water in there so they tried pulling it out by the tail, which, of course, wasn’t the best method. Then, finally, some people went and got tarps and blankets and started wriggling them out.”

The group of volunteers were then able to return all 16 dolphins to the ocean, with some remaining near the edge of the water to ensure that all of the dolphins did not try to return to shore. 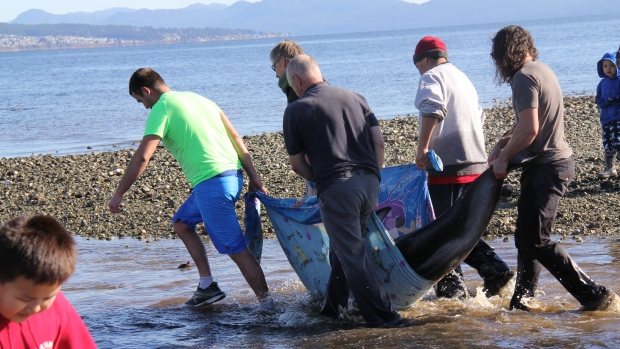 “It was pretty amazing how everyone jumped in to help out,” said MacKay.

“It worked out very well in the sense that it went very quickly – to actually get all of these dolphins out of that very shallow pond.”

MacKay believes that there were roughly 45 orcas in the pod hunting the dolphins, based on recent reports of transient orcas in the area.

“[I’m] not sure who they were, I haven’t seen photos of the fins to ID them, but reports kind of indicated that it was a group of transients that we’ve seen in this area quite a bit lately,” she said.