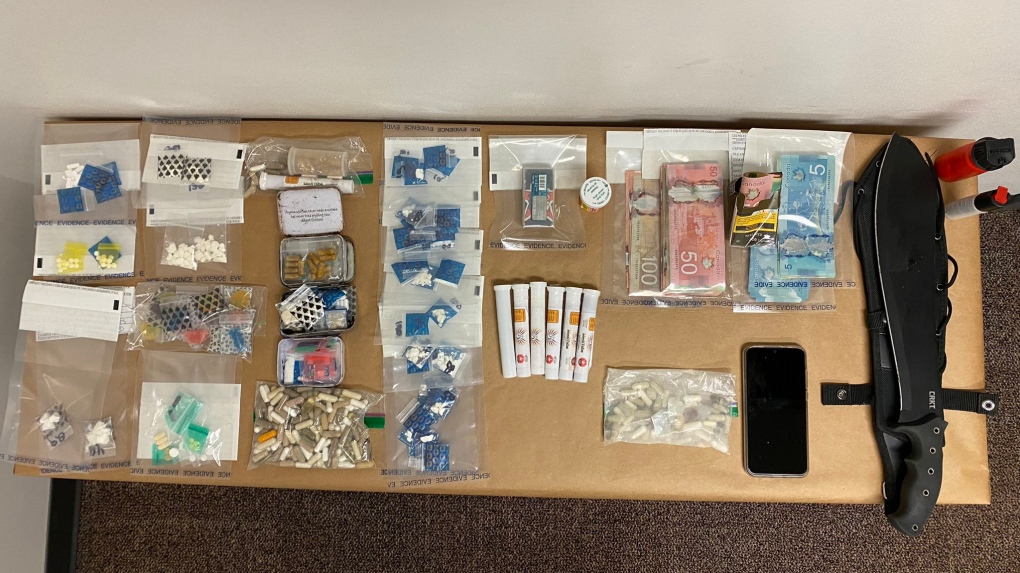 The items seized on Tuesday are shown: (Sooke RCMP)
Victoria -

Sooke RCMP say they have made their second significant drug and weapon seizure of the month after a man was arrested Tuesday.

The arrest occurred in the Evergreen Mall area after police witnessed an alleged drug transaction.

Once the alleged transaction was complete, Mounties moved in an arrested a man for possession of a controlled substance.

During the arrest, police say the searched the man and discovered a range of drugs, including cocaine, MDMA, ketamine and prescription pills that were planned for illegal resale.

Officers also seized more than $6,000 in cash, a machete and pepper spray.

Sooke RCMP say it’s the second "significant drug and weapon seizure made in the last month."

Health officials in Ontario are reporting another 653 cases of COVID-19 Sunday as well as six additional deaths related to the disease.

Quebec reported 719 new COVID-19 cases Sunday as a recent rise in hospitalizations appeared to slow over the weekend.

Canada's only female defence minister was in 1993. Is it time for another?

Prime Minister Justin Trudeau is being urged by several experts on sexual misconduct in the military to name a new defence minister as he sets about building a new cabinet following Monday's federal election.

Germany's centre-left Social Democrats were locked in a very close race Sunday with outgoing Chancellor Angela Merkel's bloc in the country's parliamentary election, a vote that will determine who succeeds the long-time leader after 16 years in power, exit polls showed. Officials from both parties said they hope to lead the next government.