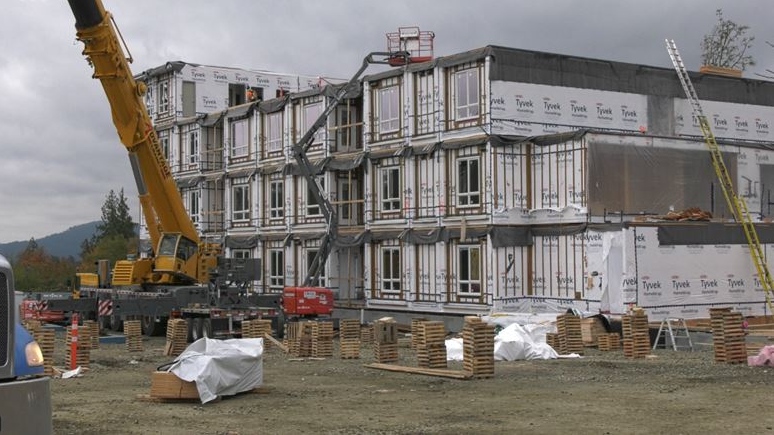 The assembly of 104 prefabricated modular housing units is underway, bringing much needed affordable rental housing to the residents of Sooke, B.C.

The modular housing project located at 2170 Charters Road will house 75 rental units. The four-storey building will include studio-, one-, two- and three-bedroom suites.

“Sooke is sort of a mix of demographics of both young families and older retiring individuals,” said M’Akola Housing Society CEO Kevin Albers. “This is the first-of-its-kind four-storey building in the District of Sooke.”

“Fifteen of the homes are through the CRD’s 'Rental Housing First Program' and the rents will be set at the shelter rate for housing which is $375 per unit per month which is a very affordable rate,” said Albers. “The balance of the units will be set at average market rents that will be established in early 2022.”

What makes the project one-of-a-kind for the District of Sooke and the Greater Victoria region is the prefabricated housing modules used to construct the affordable rental building.

“It's the first modular housing building that M’Akola has built in its over-30-year existence,” said Albers. “There is a massive shortage of trades and we thought this would be a great opportunity to try out a modular solution.”

Each of the 104 modules was manufactured in a factory by NRB Modular Solutions in Kamloops, B.C. The units were then shipped to by truck to the Vancouver area, before being loaded on a barge destined for Victoria’s Ogden Point.

The white plastic “shrink-wrapped” units gathered a lot of attention from those who saw them while they were stored at the port.

Approximately 40 of the units have been assembled so far at the site.

“You can see it being built right now with the crane in place and you go from zero storeys to four storeys in a matter of weeks,” said Albers.

Albers says when the project is completed it will help to fill the need for affordable housing in the district. He says there is a significant demand for purpose-built affordable rental housing in Sooke.

“There’s literally been decades between this project and the last project that’s been built in Sooke that provides that kind of affordability,” said Albers. “It provides access to purpose built rental housing as opposed to a secondary suite kind of solution that isn’t ideal for every make up of family.”

Albers says he expects the crew from NRB Modular Solutions to complete the assembly of the building in January. He says the affordable rental housing complex should see its first tenants the following month.