Some pot strains sell out on Day 1 of legalization in B.C.

KAMLOOPS, B.C. - Consumers in British Columbia wanting to legally buy recreational marijuana for the first time on Wednesday were most likely to use the province's online sales system, which Public Safety Minister Mike Farnworth says passed one significant hurdle in the early going.

After it went live at midnight, Farnworth says the system recorded about 1,000 sales in the first hour.

“It did not crash,” he told a conference call with reporters.

By 2 p.m., the only store that was operating in Kamloops had taken about 200 orders and the province said there had been about 5,600 online purchases. By mid-afternoon some products were sold out.

Farnworth said he expected demand to exceed supply for some of the products.

“Some strains are going to sell out faster than other strains, and it shows people are excited about the prospect of being able to buy legal cannabis in B.C. and in the rest of the country,” he said. “It doesn't surprise me. It's like you go to the liquor store and sometimes your favourite wine is sold out.”

Viviana Zanocco, a spokeswoman for the BC Liquor Distribution Branch, said producers “fell short” on what the government expected to be delivered.

Online sales were the most convenient way to buy marijuana in B.C. because there was only one retail store open on Wednesday and several customers stood in line before sunrise waiting for the government-run outlet to throw open its doors in Kamloops.

Becky Prete, who works at cannabis company Tweed Inc. and is in her 30s, drove from Kelowna and stayed overnight in a hotel before arriving at the store at 6 a.m. Bundled in a blanket and sipping a coffee, she was first in line and said she couldn't wait for the doors to open.

“I have a feeling I'll be mildly overwhelmed because I'm going to want to look at everything, but I'm just excited to check it out,” she said.

Craig McCarthy drove for two hours from Chilliwack, arriving at about 2 a.m., but his decision to nap in his car made him second in line. He has been smoking cannabis for 20 years and normally purchases shatter from an illegal dispensary.

He said he didn't mind that the government-run store doesn't carry the concentrated product, which is still illegal, and he'll buy marijuana online from now on instead of purchasing it illegally.

“I'm just happy it's finally here,” he said. “It'll absolutely change my life. It's like a feeling, a weight lifted off your shoulders, when you're constantly hiding it to a degree.”

The store is in a strip mall. Its windows are frosted and a security guard paced outside.

Blain Lawson, CEO of the distribution branch, said the store's windows meet a Health Canada regulation that prohibits product being visible from the street. “We're making sure that it looks nice from the outside, but children won't be able to see into the store,” he said.

The store has a clean, streamlined layout with white walls and glossy shelves. Mounted electronic tablets with touch screens display strains of marijuana available for purchase and prices.

Consumers can take a whiff of each strain from a clear plastic “smell jar” that has a small piece of bud inside. Staff carry small flashlights to help customers take a closer look at the nuggets, but otherwise the product is not openly displayed.

Some 92 products from 40 licensed producers are available, but only about seven per cent come from B.C. Kevin Satterfield, director of cannabis retail operations for the distribution branch, said he hoped to increase the amount of locally grown marijuana over time.

“It's going to be, for lack of a better term, a growth industry,” he said.

In addition to artwork featuring weed leaves and colourful glass bongs, shoppers are greeted by a number of signs informing them about cannabis with safety advice. The signs explain the types of cannabis plants, the dangers of consuming while pregnant and other concerns.

Satterfield said about 20 people have been hired to work at the store and they looked for staff with awareness of cannabis. All underwent criminal background checks, but a small pot possession conviction would not necessarily disqualify them from being hired, Satterfield said.

Farnworth said 173 applications for more stores are being considered.

He said part of the delay in opening stores was due to the provincial pledge that local governments will make the final decision about the types of stores - whether public or private - as well as locations and the number of retail cannabis outlets that will be allowed in their communities.

“Many communities have said they are ready to deal with processing applications ... but they want local government elections out of the way,” he said.

Municipal elections will be held across B.C. on Saturday and Farnworth said he expected more cannabis stores will open in the coming months.

Farnworth also explained the rationale behind the price of marijuana listed on the government website, which ranges from $6.99 to just over $16 per gram.

“People are prepared to pay a premium for knowing that they have a product that they can trust,” he said.

“We are confident that our pricing is competitive and that it is products that people will want.” 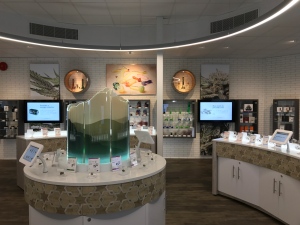 Sativa at the strip mall: Inside the first BC Cannabis Store