Sobering display to combat impaired driving set up in Courtenay 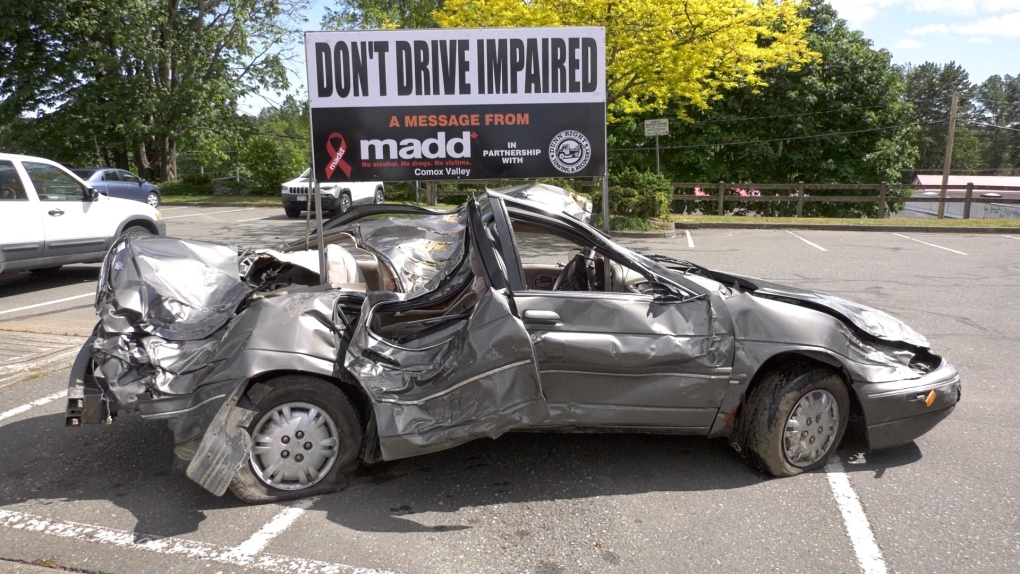 A vehicle that was driven by an impaired driver and was mangled in a crash has been put on display at a high-profile location in Courtenay on behalf of Mothers Against Drunk Driving.

COURTENAY -- His job is normally to remove crumpled vehicles, but on Friday morning Damon Dunn was instead delivering one to a parking lot near Courtenay City Hall for a specific purpose.

"Anytime that awareness can be raised for drinking and driving, if it saves one person it’s worth every hour that I put into it," Dunn said.

His company, Dunn Right Towing, volunteered to take a vehicle that was driven by an impaired driver and was mangled in a crash and put it on display at a high-profile location on behalf of Mothers Against Drunk Driving (MADD).

"I hope that it makes somebody think, maybe think twice (about) going for a drive. It’s not worth it, it really isn’t," he said about impaired driving. "There’s so many more options out there."

Dunn has participated in the "Party Program" for teen drivers over the past 15 years and says this initiative seemed just as important. In a strange twist, Dunn was actually the tow truck driver who attended the original crash that the vehicle was involved in.

"It was an excessive speed, impaired and driving too fast down Royston Road and literally flipped the car and landed in a tree. He got lucky, he really did get lucky,” he said.

Dunn says the vehicle’s driver also supports his old vehicle being used in the anti-impaired campaign.

"He was extremely OK with it and he said the same thing, if it can help save one person from doing what he did," Dunn says.

Comox Valley MADD chapter president Leslie Wells says the idea was borrowed by another chapter in Canada that was also looking for a display to do during COVID-19 times.

"It’s been used now in a few communities and we’re really happy that we’re able to bring it here. It coincides almost exactly with Road Safety Week which was last week so the timing seems really good as well," she said.

The vehicle is currently in the parking lot near Courtenay City Hall along Cliffe Avenue and Sixth Street.

"It’s a powerful image to see a vehicle that’s been involved in a crash and so awareness is the big thing – and hopefully it hits home for drivers that they realize, 'OK cars are actually dangerous and I need to be sober and paying attention,'" said Wells.

Courtenay Mayor Bob Wells says the city is proud to be a part of the effort to get the message out.

"In this day and age too many of us know somebody that’s been injured or killed due to impaired drivers and to partner with the RCMP and ICBC and MADD organizing this whole thing, the city is just really glad that we’re able to participate," Wells says.

"Lots of cars travelling by, lots of people walking by as well and that’s part of it, to raise that awareness," he added. "Whether it’s drinking or cannabis or any other drugs that are going to impair your driving, and it can even be sleepiness, all sorts of things can really impair driving."

Wells says the vehicle will be on display for the period of one month and believes it will be relocated each Friday.