VICTORIA -- A 19-year-old snowboarder has been transported to hospital Thursday after spending the night out in the elements on Mount Washington following a tumble in an avalanche.

"From his description I would say that it was probably almost a size-two avalanche which is big enough to injure, bury or kill a person," said Comox Valley Search and Rescue member Cliff Umpleby.

Umpleby and fellow team member Troy Fogarty were onboard an RCMP helicopter looking for the snowboarder who was last seen Wednesday afternoon at the ski resort.

"We managed to follow his tracks up the valley. It looks like he had been caught in a small avalanche during the evening and kind of got rolled in that and had wandered around for awhile," Umpleby told CTV News.

Police were notified when the teen failed to return to his home on Mount Washington Wednesday night.

"It was a friend that last saw him at the top of the Sunrise Lift about 2 o'clock or so," said Comox Valley RCMP Const. Monika Terragni on Thursday.

"The avalanche risk was high throughout the search area and, as such, no teams could enter the field last evening. So a major search was launched first thing this morning," said Comox Valley Search and Rescue Manager Paul Berry. 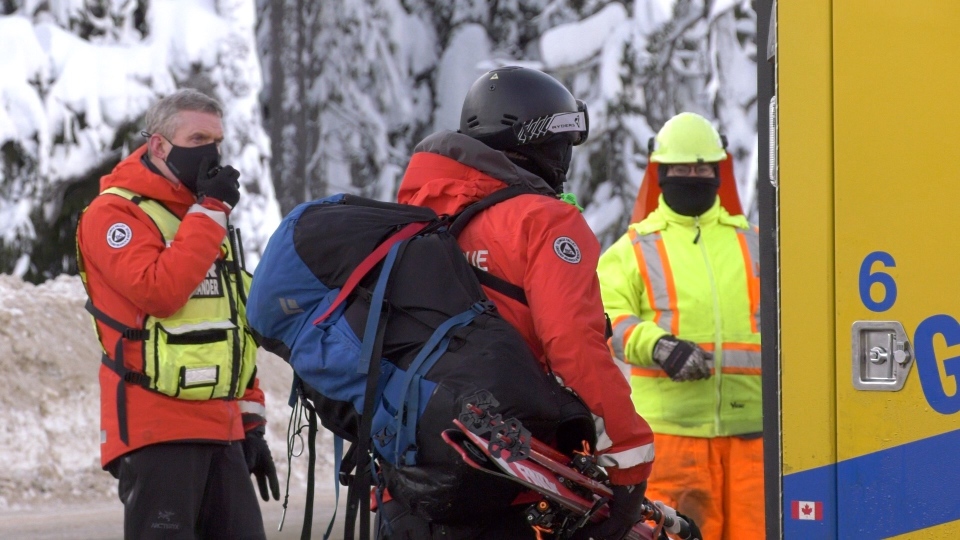 The RCMP helicopter's pilot was the first to notice the boarder and then landed in a safe zone so the searchers could ski down to the snowboarder. He was then moved to a second location where he could be picked up by the helicopter.

"It was a relief to see tracks from this morning moving around. He was picked up pretty quickly and we were able to assess the slope that we could get down to him and that happened very quickly," Fogarty said.

Rescuers quickly got the snowboarder out of his wet clothes and warmed him up with tea before flying him to the Courtenay Airpark where an ambulance was waiting.

"We know that he has some frostbite in his fingers and he will be assessed in hospital," Berry said.

Berry says the teen was alone when he disappeared and did not have a cell phone. He adds that there was heavy snowfall overnight

Even Thursday morning, as searchers were looking for the missing teen, Umpleby says they spotted other individuals also skiing in avalanche terrain.

"We have a lot more snow coming in and the hazard is high," said Umpleby. "It's going to stay high and the public needs to realize that there's a real danger out there and really think twice about where they're going."

With more storms on the way and more people heading into backcountry areas, searchers are concerned they may be called out again.

"Always be prepared. You never know when you're going to spend the night. Have warm clothes, have extra clothes, have enough gear and have the proper avalanche gear and know how to use it and always ride with somebody because we see this every once in a while," said Fogarty.