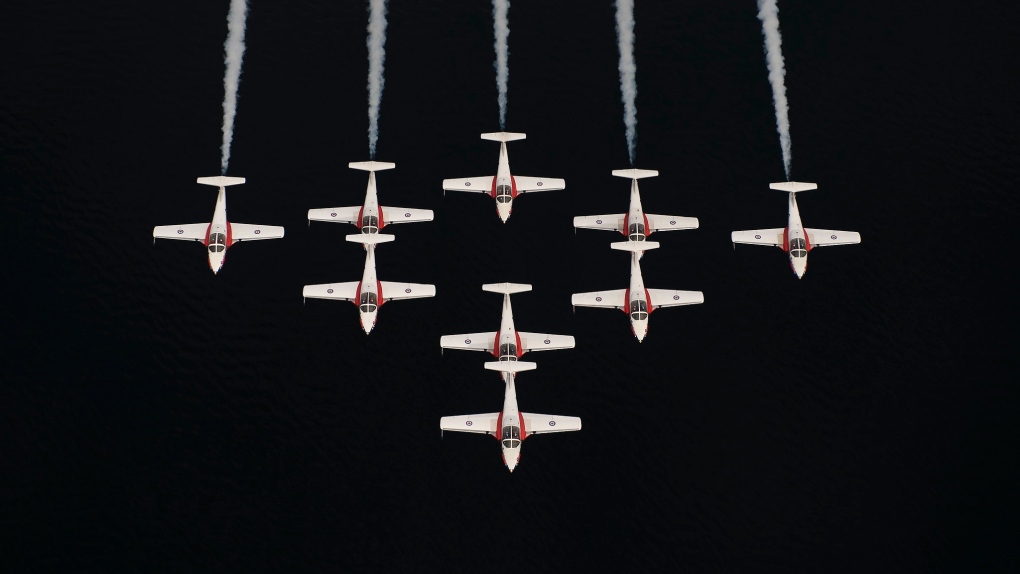 A problem with the aircraft's emergency ejection parachute has grounded the Canadian Forces Snowbirds for the foreseeable future.

The Department of National Defence said Friday the iconic aerobatic team will not fly in upcoming airshows and flybys until a problem with the timing device that releases the parachute during an emergency ejection is fixed.

The military says the issue was discovered during maintenance on parachutes aboard the CT-114 Tutor aircraft flown by the Snowbirds team.

Airplane technicians at 15 Wing Moose Jaw, in Saskatchewan, found on June 19 that the timing device may not be calibrated correctly, according to a National Defence statement.

"Out of an abundance of caution, the parachutes currently being used by aircrew flying in CT-114 Tutor aircraft will now be re-tested and re-packed, as necessary, to ensure proper timing is set for their activation in the event of an emergency," the department said.

The Royal Canadian Air Force is working with a third-party contractor to fix the problem, with no timeline for completion in sight, according to the military.

The air force expects that upcoming performances scheduled for next week in New Brunswick will be cancelled. Technicians are working to get the aging Tutor jets back in the air for Canada Day celebrations in Ottawa, according to the military.

"While it is certainly disappointing the Snowbirds anticipate they will need to cancel upcoming performances until this technical issue is resolved, I applaud our aviation technicians for discovering this issue," said 1 Canadian Air Division commander Maj.-Gen. Eric Kenny in a statement.

"We have full confidence that this issue will be resolved in a safe manner, working with a third-party aviation contractor and our own technical and maintenance experts," Kenny added.

The air force says the issue with the parachute timing device is not related to the fatal crash of the Snowbirds jet that killed public affairs officer Capt. Jenn Casey in Kamloops, B.C., in May 2020.

One month after the fatal Kamloops crash, a military investigation into an earlier crash was released, finding that the ejection seat of a Snowbirds aircraft became tangled with the pilot's parachute as he tried to escape his plane before hitting the ground in 2019.

The pilot sustained minor injuries and the Tutor jet was destroyed after slamming into a farmer's field while en route to an airshow in Atlanta, Ga.

Investigators determined the entanglement prevented the parachute from opening properly.

The report found the most likely cause of the parachute malfunction was the release of one or more parachute pack cones before the timing device was activated.

"Entanglement of the suspension lines with parts of the ejection seat immediately followed, ultimately disrupting the proper opening of the parachute canopy," according to a summary of the report.