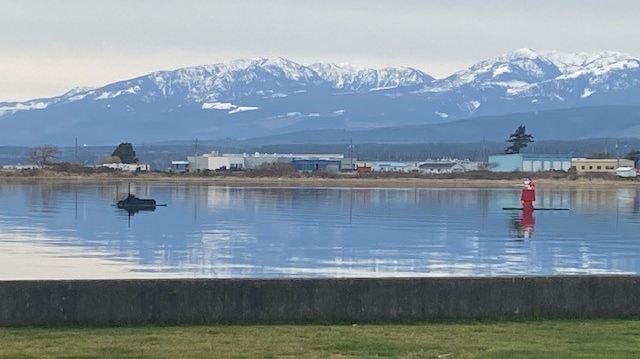 The water display in Comox Bay is shown: (Harvey Grant)

COMOX -- His battles against the Red Baron were comic strip fodder, but now Snoopy – the popular Peanuts character – appears to be taking on COVID-19.

An eight-foot-high plywood likeness of the popular beagle appeared in Comox Bay recently, along with a black submarine, both of which are catching the public's attention. 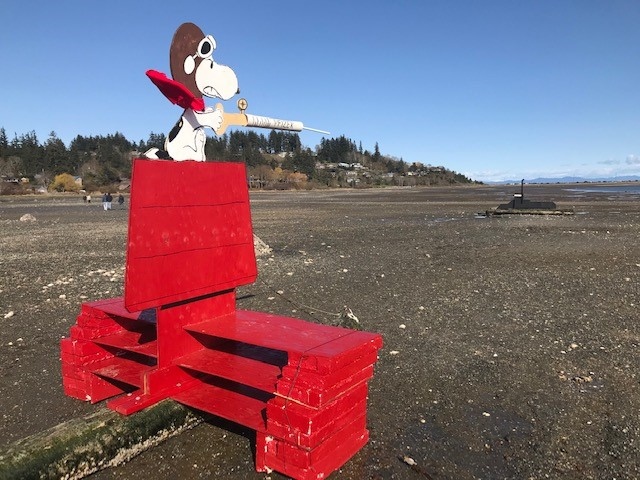 "I guess it's the doom and gloom in the world today, all we hear about is COVID and the Pfizer vaccine being the light at the end of the tunnel," says Harvey Grant, the Comox resident who created the display.

He says that's what led him to fashioning the water battle where Snoopy points his vaccine needle towards the submarine.

"The submarine, I guess, being evasive, it lurks around all the time but it's there. So the name of the submarine was the COVID-19 and the Pfizer vaccine was Snoopy to the rescue," he says.

Snoopy and the sub appeared in Comox Bay on April 1 as part of an April Fools initiative. Grant also created one last year in the same spot, an eight-foot-high orca fin and a smaller calf fin which he says fooled quite a number of people.

Grant says he doesn't consider himself to be a big Snoopy fan, but rather saw the character in this instance as the unsung hero. The mystery around the display has sparked questions on social media.

"I didn't put in on my Facebook but (my wife) put it on her Facebook and there's quite a bit of feedback. I just texted it to a couple of my friends and they just tell me I have too much time on my hands," he says.