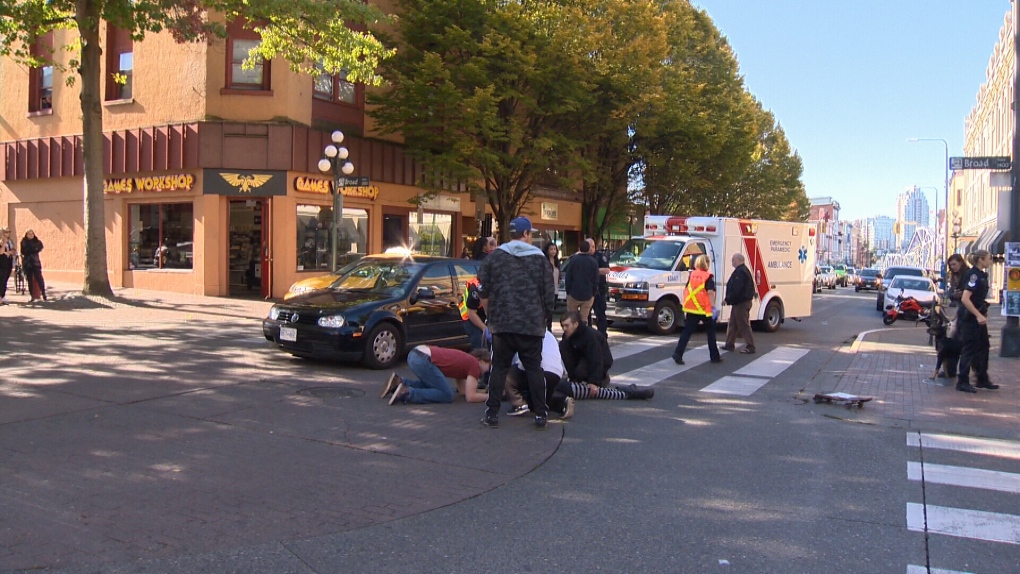 VicPD says a woman on a skateboard was travelling fairly quickly when she was struck in downtown Victoria Sunday, Oct. 15, 2017 (CTV Vancouver Island)

Police are reminding skateboarders of the rules of the road after a woman was struck in a crosswalk in downtown Victoria on Sunday.

The woman was riding fairly quickly on a skateboard when was struck in the intersection at Johnson and Broad streets around 1:15 p.m., according to police.

She suffered non-life threatening injuries including a possible broken leg, and paramedics transported her to hospital.

Police said Monday that according to witnesses, the skateboarder failed to stop or pause before entering the crosswalk, giving the driver no chance to stop in time.

“People really need to be careful when they are entering crosswalks and make sure that there is accountability on both the motorist and pedestrians,” Sgt. Kari Cochrane said in a statement. “In order for everybody to come out safe, everybody needs to pay attention.”

Police are reminding the public that skateboards aren't allowed to be ridden on downtown sidewalks, and rider must also dismount the skateboard bfeore entering a crosswalk. The rules also apply to cyclists.

Cyclists and skateboarders should wait for traffic to completely stop before entering, and try to make eye contact with drivers when crossing, police said.

The police department says charges are not expected in the collision.