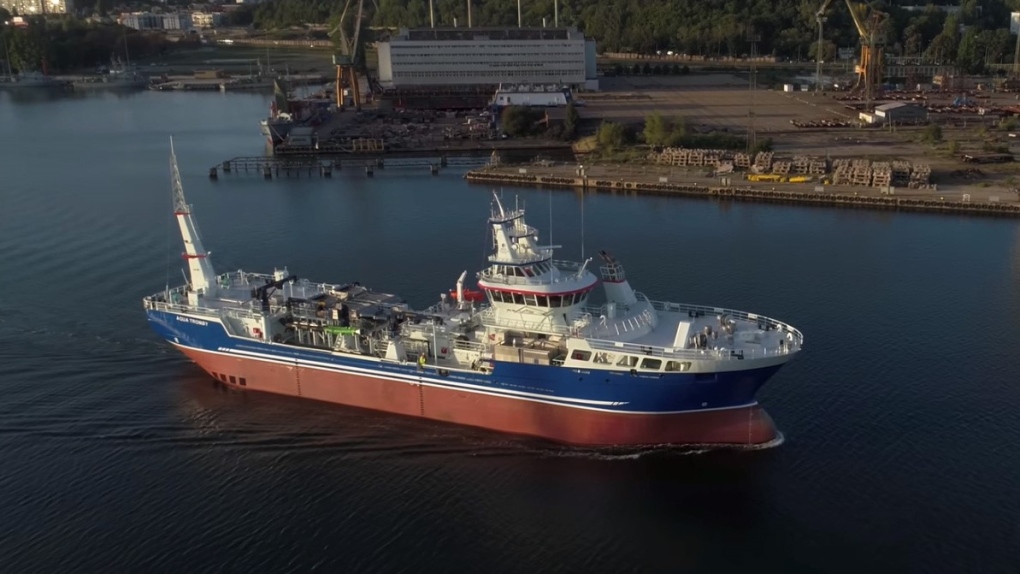 Mowi Canada West, which operates Marine Harvest fish farms in B.C., says the Aqua Tromoy, shown in a handout photo, is the most technologically advanced vessel ever to serve the Canadian aquaculture industry. (The Canadian Press/Handout)

CAMPBELL RIVER, B.C. - A huge vessel capable of offering what is described as “fish friendly health treatments” to farmed salmon is now at work for the largest Atlantic salmon farming company in British Columbia.

Mowi Canada West, which operates Marine Harvest fish farms in B.C., says the Aqua Tromoy is the most technologically advanced vessel ever to serve the Canadian aquaculture industry.

Mowi says the ship is an important tool in its pest management strategy, partly because it can lift farmed salmon from their pens and bathe them in fresh water to remove pests such as sea lice.

The ship is currently moored in Duncan Bay, just north of Campbell River.

The Aqua Tromoy has triple the capacity of any other Mowi vessel, Morrison says in a statement.

"Onboard reverse osmosis systems ... can generate ... fresh water from sea water to fill the holds in 24 hours," the release says.

"Atlantic salmon are lifted aboard from farm pens and immersed in the fresh water, which is harmless to the fish, but removes sea lice and other saltwater microbes and parasites that do not tolerate low-salinity water well.”

Before the water is pumped back into the ocean, it is passed through filters to capture and retain any parasites, the company says.

The diesel-powered ship, carrying a live-aboard crew of nine, also has an on-board water treatment process, while the engine system uses urea to reduce nitrogen oxide pollutants in exhaust gases.