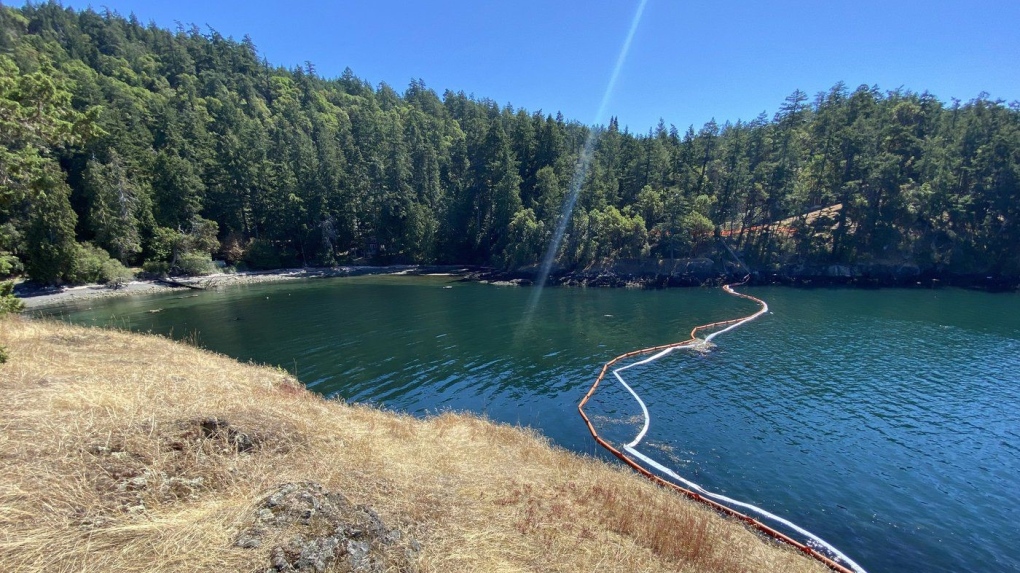 The United States Department of Ecology says an oil sheen from a sunken fish boat appears to have completely dissipated from an area of U.S. waters just east of Vancouver Island.

The update comes as the U.S. Coast Guard and other agencies work to recover the 15-metre Aleutian Isle that went down Saturday with about 10,000 litres of oil and diesel aboard.

Five crew members were saved, but the vessel now lies in roughly 60 metres of water near San Juan Island in Haro Strait, about 25 kilometres east of Victoria.

The statement from the Department of Ecology says no oil residue has been found on the Island and measures are being used to deter any whales from venturing near the wreck, which is in a key feeding ground for critically endangered southern resident orcas.

One large seine net that floated free of the fish boat was recovered Tuesday and divers also pulled up several panels of a second net that was floating in about 30 metres of water.

The depth of the Aleutian Isle is complicating efforts to examine it before the remaining fuel can be drained or the ship can be salvaged, and officials say there is currently no timeline for any of that work.

This report by The Canadian Press was first published Aug. 17, 2022.

A series of unusual leaks on two natural gas pipelines running from Russia under the Baltic Sea to Germany triggered concerns about sabotage Tuesday, overshadowing the inauguration of a long-awaited pipeline that will bring Norwegian gas to Poland to bolster Europe's energy independence from Moscow.

The number of asylum seekers entering Canada between formal border crossings has surged to the highest point since the government started tracking them in 2017, as dropped pandemic restrictions enable more travel and conflict and catastrophe displace people in many parts of the world.

Police have arrested another man in connection to an alleged violent attack on Elnaz Hajtamiri in a Richmond Hill, Ont. parking garage just weeks before she disappeared in January.

An American who returned to U.S. soil last week after being held by Russian-backed forces for more than three months said Monday that it's "surreal" to be back home.