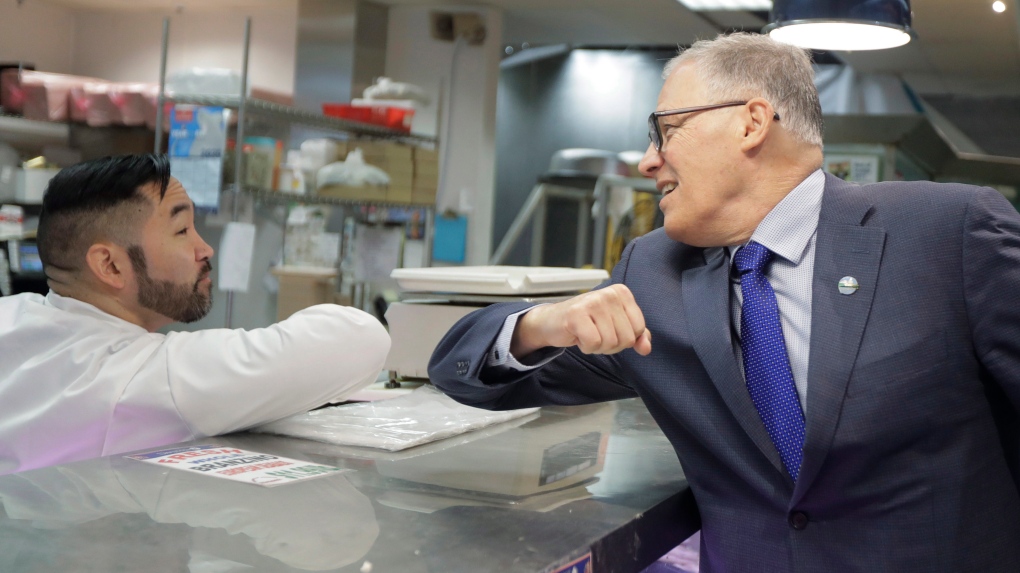 Washington Gov. Jay Inslee, right, bumps elbows with a worker at the seafood counter of the Uwajimaya Asian Food and Gift Market, Tuesday, March 3, 2020, in Seattle's International District. Inslee said he's doing the elbow bump with people instead of shaking hands to prevent the spread of germs, and that his visit to the store was to encourage people to keep patronizing businesses during the COVID-19 Coronavirus outbreak. THE CANADIAN PRESS/AP-Ted S. Warren

VANCOUVER -- “Wash your hands” has been the usual advice during flu season but “hands off” may well be the new mantra to reduce the risk of spreading the novel coronavirus as social norms like shaking hands are shunned for nods, smiles and tapping of feet.

Some churches in Canada have replaced handshakes with other gestures as COVID-19 spreads around the world.

Melissa Godbout, spokeswoman for the Roman Catholic archdiocese of Vancouver, said the archbishop has sent a letter to priests saying parishioners could be advised to replace handshakes with other ways of acknowledging each other during the sign of peace portion at mass.

She said her parish priest in nearby Chilliwack has acknowledged the virus as the dioceses watches for recommendations from the provincial government.

“We are monitoring the situation closely and checking in with the Ministry of Health multiple times a day and we will be working on updating the policy should we deem it necessary,” Godbout said.

“At my parish .... this past weekend our priest said if we feel comfortable we should just bow or nod instead of shaking hands so that's what we did.”

The number of COVID-19 cases in South Korea had reportedly spiked on Tuesday to nearly 5,200, with many of them clustered around a local church in the city of Daegu. The death toll had risen to at least 28 in that country.

Canada had 33 cases of the virus - 20 in Ontario, 12 in British Columbia and one in Quebec.

Neil MacCarthy, who speaks for the archdiocese of Toronto, said some parishes began shunning handshakes in 2003 during the SARS outbreak and have never returned to that nicety as parishioners have used smiling, nodding, bowing or holding up the peace sign to greet each other.

“What we're really trying to stress is that people who are distributing communion are washing their hands before and after,” he said. “Some parishes have hand sanitizer available when people come into the church.”

Health officials in Toronto have not advised any other changes, MacCarthy said, adding parishes recommend people stay home if they are sick and watch mass online.

The archdiocese released a statement this week to all parishes and staff saying the spread of germs that cause respiratory illnesses can be prevented by washing hands, not touching the eyes, mouth or nose and avoiding contact with people who are sick - the same advice health officials around the world have given.

The archdiocese of Montreal is in the process of preparing an advisory that will be sent to parishes before the weekend regarding precautions that can be taken to limit the spread of COVID-19, said spokesman Eric Durocher.

Dr. Bonnie Henry, provincial health officer in British Columbia, said she has stopped shaking hands and advised people to use another form of acknowledgment, such as putting their hands in prayer, bowing or just smiling and looking someone in the eyes when saying hello.

“It is an extraordinary time and it's challenging for all of us,” she said, adding the change away from handshaking is a gesture of solidarity during the global spread of the virus.

“It's a small gesture but a gesture that shows that we are paying attention to what's going on and it's something that we can do in our community.”

Henry said she worked on the Ebola outbreak in Uganda in 1999, when people replaced hugs and handshakes with tapping of their feet.

Kei Esmaeilpour, spokesman for the Civic Association of Iranian Canadians of B.C., said members have begun holding out their hands to each other instead of shaking hands.

“Everybody knows why and this is not rude,” he said. “This is about caring for each other. If you're not handshaking, your friend will not be unhappy. He or she will just understand that you are caring for them.”

On Tuesday, officials in British Columbia asked travellers from China and Iran to isolate themselves for 14 days when they return home to Canada.

Esmaeilpour said many community members have already started voluntarily isolating themselves at home for that length of time after returning from Iran.

On Monday, some Iranian-Canadians in the Vancouver area joined forces to start a new campaign to try and help people who would be stuck at home in quarantine. A group of 147 people had signed up on an app with days and times they would be available to drop off groceries or assist in other ways, Esmaeilpour said.

This report by The Canadian Press was first published March 4, 2020.