Oyster River firefighters were called first to a farm on Nailer Road around 11:30 a.m. and when they arrived they found four buildings engulfed by an inferno which was threatening a fifth barn.

"We're not sure how it happened. When I showed up there were four fully engulfed, we worried about the fifth going up and that's where we were putting most of our water on just to save that one," said Oyster River deputy fire chief Chris Murray.

Thick, black smoke billowed out of the area, an indication of what materials were burning inside the structure.

"Big tires, we heard some explosions so maybe paint cans or propane tanks around," Murray said. 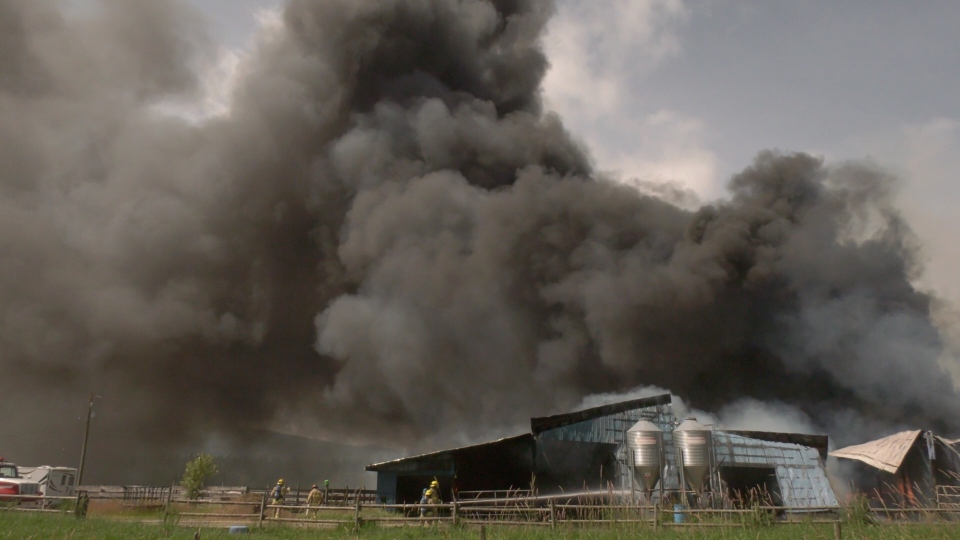 Mary Lysy lives across the road from the farms and was alerted to the incident when she heard explosions.

"Like gunshot blasts, I thought that's what they were," Lysy said. "But then I saw the smoke and flames."

She thought the flames were coming from her trees at first but realized it was the farm across the way and the area was filling with black smoke.

Cam Edwards also lives nearby. "We'd seen the smoke over from my place and so we came running to make sure no animals or people were still inside and it looks like it was pretty well on fire at that point," Edwards said.

Murray believes there were four animals in the area when the fire began but they made it out safely.

Crews were back on the scene Thursday morning to deal with hotspots and try to confirm the origin of the fire.