'Seems like an app that should be around': Unofficial BC Ferries app shows how full sailings are

'Seems like an app that should be around': Unofficial BC Ferries app shows how full sailings are 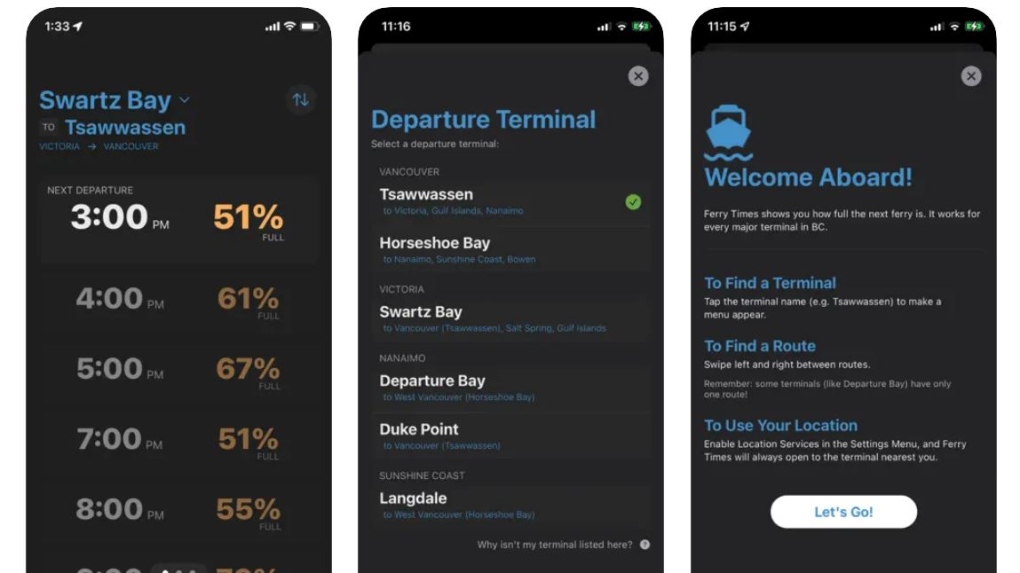 Screenshots of the BC Ferry Times app are shown on the Apple App Store website.

A Victoria man has designed a free app that lets users check on BC Ferries sailings and see how full they are.

The app, called BC Ferry Times, is available for Apple devices and shows how full a given sailing is, based on BC Ferries data.

The app is similar to an older app called Ferry Rush, which shut down last year.

In fact, developer Samuel Pratt says that the app is based on the interface of Ferry Rush.

Pratt says the app requires new coding whenever the BC Ferries website has an update, since it uses data directly from the official site.

The developer of Ferry Rush shut down his app when he no longer wanted to keep up with updating the application.

"When he shut down the app I emailed him and asked if I could use his interface and design on another app, and he generously said yes," said Pratt.

"It just seems like an app that should be around."

The application is free, but there are some extra features that can be purchased for $3.99, which will support development.

While the extra features are handy, Pratt says the app is perfectly useable on its own.

"I didn't want to put anything essential behind the paywall," he said.

With BC Ferries seeing many cancellations recently, largely due to a staffing shortage, the app also accounts for sudden cancellations.

Pratt says cancelled sailings are automatically removed from the app, though it does not alert users if a given sailing has been cancelled.

LIVE | Following live: Quebec Election 2022 coverage and live results as they come in

After 36 days, the Quebec election campaign is now over and voters are heading to the polls Monday to choose the next provincial government. Follow along as CTV Montreal provides coverage of election day and the results when they come in.

Sport Minister Pascale St-Onge is once again calling for change in Hockey Canada's leadership in the wake of new allegations against the troubled sporting body.

A new project called '4000 Cover Stories' is re-imagining the stories of missing and murdered Indigenous women and girls in Canada with the front-page prominence their families feel they deserve, with advocates planning to deliver the massive newspaper to the prime minister.