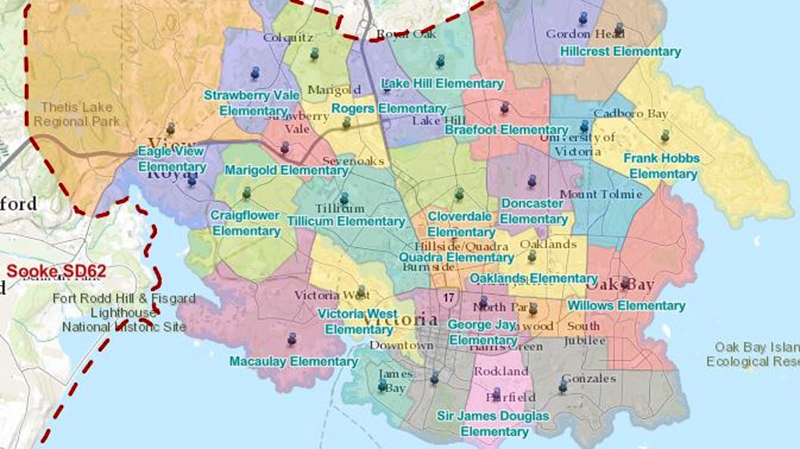 The Greater Victoria School District has unveiled new, proposed catchment boundaries for its schools, amid increasing student enrollment and limited space in schools.

An interactive map online shows the current boundaries next to the proposed 2020 changes.

The review started in the fall and included feedback from 5,000 people. A few proposed changes include creating catchments for South Park and Cloverdale elementary schools to support growth in those areas.

The district says Central Middle School is full and growing. As a result, it’s proposing an expansion at Lansdowne Middle School by opening the former Richmond Elementary school as a south campus to solve capacity issues.

“We focused on trying to keep the boundaries as stable as we could in this exercise,” said secretary treasurer Mark Walsh.

Parents will be given a chance to weigh in and hear more at open houses scheduled for February – then the board of education will decide on the new catchment boundaries in the spring.

SD 61 says this is the first review of its catchment boundaries in 20 years, and there’s been “considerable” population growth over the decades. It also stressed that students will not be asked to leave a school, should their catchment change.

The superintendent says the district is trying to limit the number of changes for families.

"These are never easy decisions and the District has tried to be thoughtful when considering all of the potential options and outcomes," said Shelley Green. "Unfortunately, there is no option where everything can remain the same so we are trying to find the best solution."

The review hopes to create room in schools, as some are full, and balance enrolment across the district.