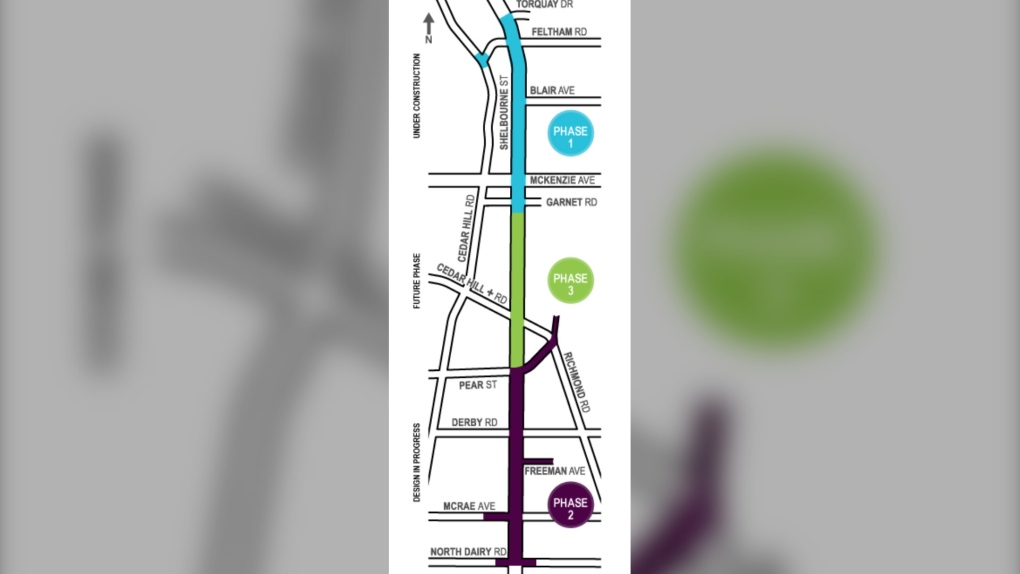 The next phase of Saanich's Shelbourne Street Improvements Project (SSIP) is underway, with the promise of new separated bike lanes and a series of other changes coming to the busy roadway.

The district just wrapped up the first phase of the SSIP, which saw construction from Torquay Drive to Garnet Road.

The second phase will run along Shelbourne Street from Pear Street through to North Dairy Road.

Some of the more noticeable upgrades featured in the second phase of the project include separated bike lanes in both directions, and new traffic signals and pedestrian-activated lights along the street.

All sidewalks on this stretch will also be replaced, and the roadway will be repaved.

More street furniture, such as benches, garbage cans and bike-locking posts will also be installed along the street, as well as improved bus stop amenities, such as shelters and lighting.

Phase two of the SSIP also includes a "UVic bike connector" which includes a raised biking and walking path on Shelbourne Street between Poplar Avenue and Cedar Hill Cross Road.

Meanwhile, the district plans to replace underground infrastructure along the street, including water, storm, and sewer systems.

Construction of phase two of the project is already underway, and is expected to complete in two years, in summer 2024.

"With the positive feedback on the first phase, it’s exciting to see the next phase of this major project get underway," said Mayor Fred Haynes in a statement Tuesday.

"Residents, businesses and commuters will all benefit from the improvements we’re making on this important, busy corridor."

A detailed list of what's being done during phase two of the Shelbourne Street Improvements Project can be found on the District of Saanich website.

A former policeman burst into a day care centre in northeastern Thailand on Thursday, killing dozens of children and teachers and then firing on more people as he fled in the deadliest rampage in the nation's history.

Jacob Hoggard expected to be sentenced today, faces up to 10 years in jail

Hedley frontman Jacob Hoggard could be sentenced today to up to 10 years in jail in the sexual assault of an Ottawa woman.

Investigators in California are working to determine the motive behind the killing of a family of four -- including an 8-month-old baby -- as the bodies were recovered Wednesday in a rural farm area after they were kidnapped earlier this week by an armed man at their business.

Chess grandmaster Hans Niemann said he is 'not going to back down' as accusations of widespread cheating intensify. On Tuesday, an investigation by popular online platform Chess.com claimed Niemann "likely cheated" in more than 100 online matches.