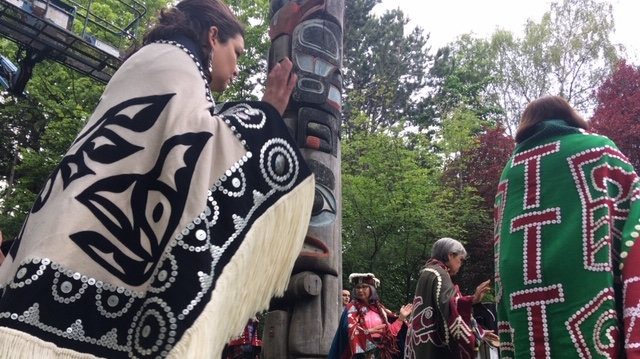 The mortuary pole was originally carved to serve and mark a grim event in the First Nation’s history. (CTV Vancouver Island)

Surrounded by blessings and ceremonial dances, a second Indigenous pole was brought down at the Royal BC Museum in Victoria.

The pole brought down on Wednesday is a replica Haida mortuary pole carved by renowned carver Mungo Martin in 1955.

The mortuary pole was originally carved to mark a grim event in the First Nation’s history.

A young and high-ranking Haida woman was murdered just off of Vancouver Island. Her remains were brought back to the small village of Tanu, in Haida Gwaii, where the pole was carved and her remains were set in it.

“These poles are important to us because they are the final resting place of people of high rank,” said Allan Davidson, hereditary Chief of the St’langng Laanaas First Nation on Haida Gwaii.

“To bring this home for us is significant, so that this piece can also be finally laid to rest.”

This is the last pole that will come down at Victoria's Thunderbird Park.

On May 31, another pole was removed for shipment back to its final resting place in Fort Rupert by wishes of the Mungo Martin family.

Both poles were suffering from internal rot and had started to become a safety risk. But the move is also part of a bigger repatriation project by the Royal BC Museum.

The project's goal is to return many sacred and important artifacts to their rightful Indigenous owners.

“Repatriation has been going on at this museum for a long time and continuing those relationships with Indigenous people is so important,” said Lucy Bell, head of Indigenous collections and repatriation at the museum.

“So when the Indigenous communities tell us to lay a pole back to earth, we have to listen to that and honour those wishes.”

The two poles will now be shipped to the remote northern community and laid down in a scared space. There they will be left to decompose and become one with the earth again. 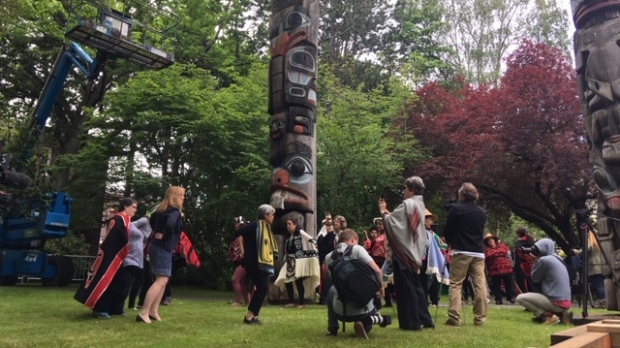