The search for a missing woman who arrived on Vancouver Island from Regina last week is ongoing, police say.

Nanaimo RCMP and fire investigators boarded a small sailboat moored at the Department of Fisheries and Oceans dock in Departure Bay in Nanaimo on Wednesday.

RCMP say that can't speak on what the search is related to, or if they've taken control of the vessel.

The vessel could be connected to the mysterious disappearance of Saskatchewan resident, Laura Huebner.

"I can’t confirm any other secondary searches," said Const. Gary O’Brien of the Nanaimo RCMP. "This is quite common when you have a missing person investigation."

According to a social media post, Huebner texted a photo to her father on April 25, showing her view from a sailboat. 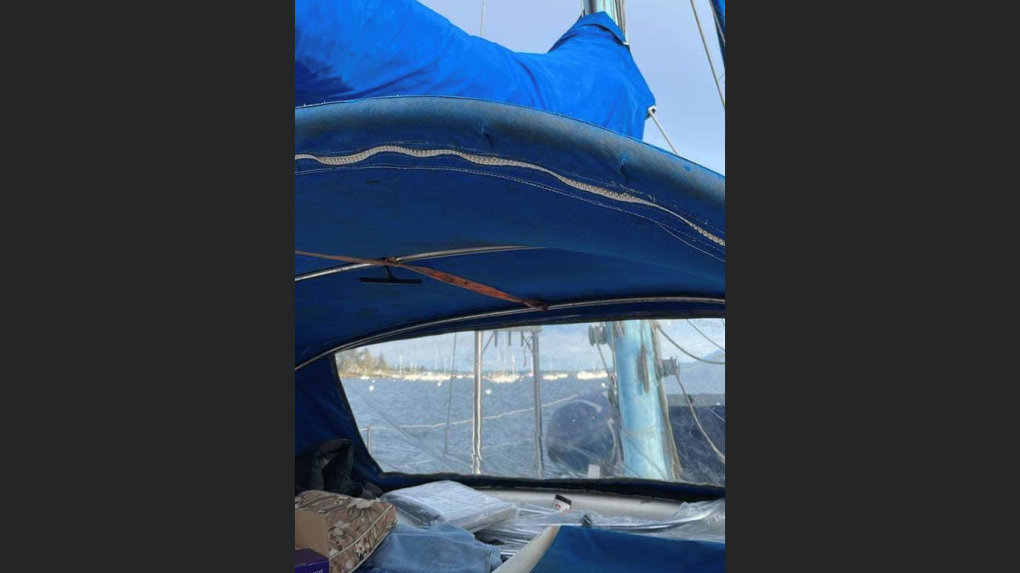 The photo Huebner sent to her father is shown.

When asked, police said they would not confirm of it was the same boat that the Mounties were searching on Wednesday, or what investigation the vessel may be a part of.

Forty-five-year old Huebner arrived at the Victoria International Airport in Sidney on Sunday, April 24. Police confirmed her arrival with CCTV footage taken at the airport. That was the last confirmed sighting of the woman, though she's believed to have travelled to Nanaimo.

Huebner was supposed to return to Regina on April 28 but did not.

On April 29, her family reported her missing to the Sidney RCMP, who opened a missing persons file.

That file has been concluded and Nanaimo RCMP have taken over the search.

"Our belief is that she travelled to the Nanaimo area and that’s why Sidney’s investigation has been concluded," said O’Brien. "We’ve picked up where they left off."

A social media post from Huebner’s brother-in-laws says her family is worried.

"With each day that passes, we grow more concerned for Laura’s safety," it reads.

"She has had no contact with her family," said O’Brien. "This is completely out of character and they’re extremely worried for her safety."

Police have released what they claim is the most current photo of Huebner. She is 5'8" and weighs 140 pounds. She was last seen wearing a white jacket, white hoodie and blue jeans.

"We’re starting from ground zero, working towards where she may be," said O’Brien. "We’re checking with all the sources in town."

"We have our general duty members as well and the investigation is being undertaken by our Serious Crimes Unit," he said.

Anyone with information on Huebner's whereabouts is asked to contact Nanaimo RCMP.

A pair of new reports from the Bank of Canada point to rising inflation expectations by Canadian businesses and consumers. In its business outlook survey released Monday, the central bank said businesses' expectations for near-term inflation have increased, and firms expect inflation to be high for longer than they did in the previous survey.

'He was a hero': Family says Ottawa man killed in fatal collision sacrificed himself

The family of an Ottawa man killed in a Canada Day crash in the west end says Tom Bergeron died exactly as he lived: selflessly thinking of others before himself.

Torched forests and cities burned to the ground. Colleagues with severed limbs. Bombardments so relentless the only option is to lie in a trench, wait and pray. Ukrainian soldiers returning from the front lines in eastern Ukraine’s Donbas region, where Russia is waging a fierce offensive, describe life during what has turned into a gruelling war of attrition as apocalyptic.

A Black man was unarmed when Akron police chased him on foot and killed him in a hail of gunfire, but officers believed he had shot at them earlier from a vehicle and feared he was preparing to fire again, authorities said Sunday at a news conference.

Chinese-Canadian tycoon due to stand trial in China, embassy says

Chinese-Canadian billionaire Xiao Jianhua, who went missing in Hong Kong five years ago, was due to go on trial in China on Monday, the Canadian embassy in Beijing said.

Dutch farmers angry at government plans to slash emissions used tractors and trucks Monday to block roads and supermarket distribution centers, sparking fears of store food shortages in the latest actions through a summer of discontent in the country's lucrative agricultural sector.