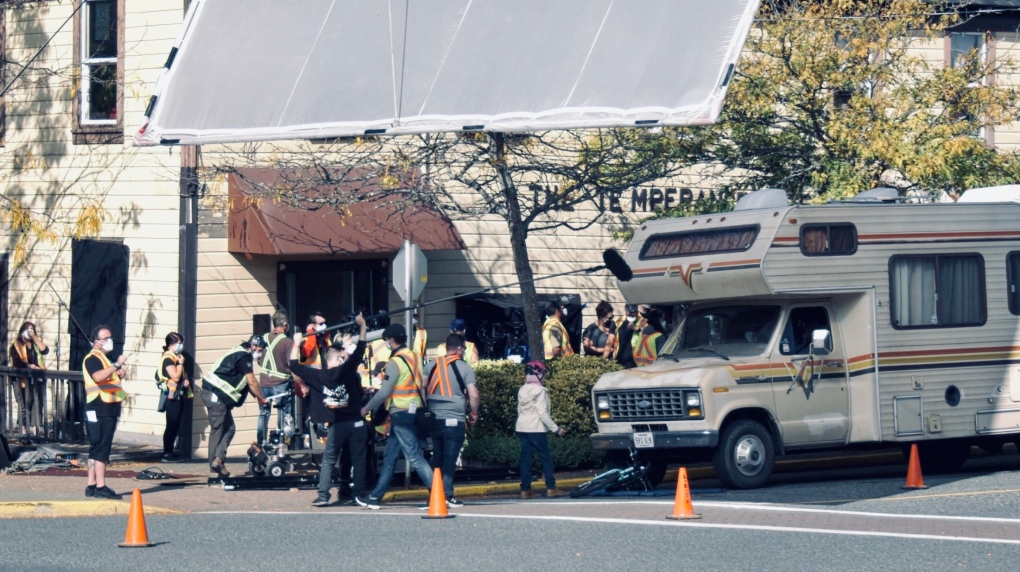 A production crew is seen filming a scene for Resident Alien, which is being filmed in Ladysmith: (CTV News)

LADYSMITH -- Cast and crew of television series Resident Alien have returned to the town of Ladysmith to continue filming episodes for the sci-fi series’ first season.

Production for season one of Resident Alien started back in late January, with the first period of filming completed in early February.

The series was originally scheduled to continue filming in Ladysmith in March, but was halted due to the COVID-19 pandemic.

“Having this show deep enough into its season before COVID hit, it allowed them to go back and finish it up,” said Joan Miller, film commissioner for the Vancouver Island North Film Commission.

Filming started Sunday and is expected to be completed Tuesday evening.

According to IMDB, Resident Alien is about an alien who crash-lands on earth and embeds himself in the small community of Patience, Colorado, (Ladysmith). The alien takes on the identity the town’s doctor and wrestles with the moral dilemma of his secret mission on Earth.

“It’s a great storyline,” said Miller. “We have high expectations for the success of this show because Ladysmith is now playing the ‘hero town’ role.”

A “hero town” is defined as a location that places the central character of a TV or film series and is used as the main setting for the story.

In the autumn of 2018, Ladysmith also played the hero town role for the Hollywood film, Sonic the Hedgehog. The movie premiered in January and has grossed over $300 million at the global box office.

The film commission says a sequel for Sonic the Hedgehog is in the works but there is no word yet if Ladysmith will be used as the main filming location again.

“Ladysmith is becoming that iconic look that can portray that mid-western small town,” said Miller.