Save herring to save endangered whales, conservation groups say 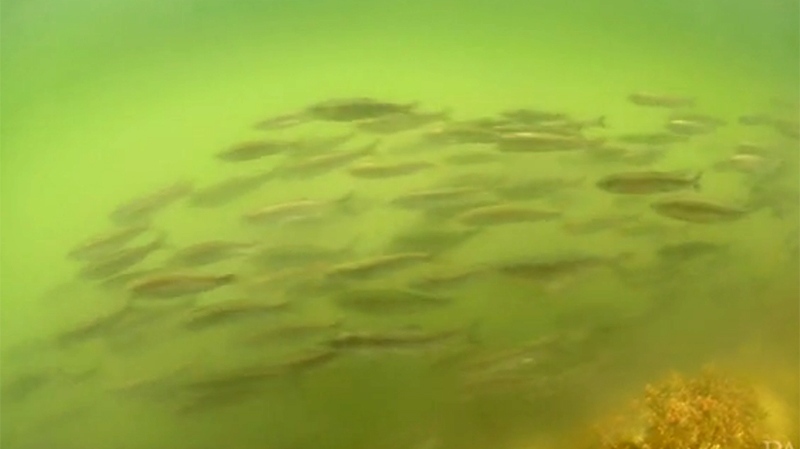 A school of herring swims in this undated still taken from Pacific Wild footage.

By early March, bays around Denman and Hornby Islands will turn a bright, turquoise blue.

It’s a natural spectacle caused by spawning herring, attracting both tourists and marine life such as: otters, seals and whales.

Local conservation groups say the herring need to be protected to save imperiled orcas.

They are calling on the Department of Fisheries and Oceans to cancel the upcoming roe herring fishery in the Strait of Georgia, to allow the herring to flourish.

“A moratorium or shutting this thing down for awhile, while they rebuild again,” said Grant Scott with Conservancy Hornby Island.

They conservationists draw a direct line between the health of the herring fishery and the decline of the endangered southern resident killer whales.

It’s a simple connection: No herring means no Chinook, and no Chinook means no whales because they are starving.

The Georgia Strait is widely accepted as the only healthy herring fishery left. The other four out of five fisheries around B.C.’s West Coast are either depressed or collapsed.

That has Scott asking why the DFO plans to allow a fishery to go ahead in the Georgia Strait.

“A lack of logic in why they keep doing it,” he said.

Final quotas haven’t been determined yet, but the DFO is proposing 20 per cent of the fish population.

“The stock actually appears to be near historic highs, so it does appear to be quite healthy,” said Neil Davis, Director of Resource Management with Fisheries and Oceans Canada

He explained the DFO has come to that conclusion, after a long process involving a scientific survey in which they gather information about the abundance and distribution of the fish. Then other experts review the findings. Finally, the DFO consults with different interests, including First Nations, fishers and environmental groups.

One of those environmental groups has a very different take on the health of the herring stocks.

“They (DFO) are on the one hand saying, you know, that we have to do everything possible to save Chinook salmon, to save southern resident killer whales, meanwhile, they are allowing the status quo, mining, literally mining, of the foundation of their food supply,” he added.

Pacific Wild said it’s not an important fishery from a human food point of view.

“We’re harvesting these fish for the roe market, the sushi market in Japan and the rest of it is being ground up, 90 per cent of those fish are being ground up for cat food, garden fertilizer and to feed Atlantic salmon in these open net cage salmon farms,” said McAllister.

His organization also argued prices have taken a dive and it is no longer a very profitable fishery.

“I think it’s still a viable fishery for the commercial guys that are left doing it,” insisted Kim Olsen, Vice President of the United Fisherman and Allied Workers Union – Unifor.

He said several hundred people work on the fishery, and the union believes the DFO has done its research.

There is, however, a growing interest in stopping the roe herring fishery.

An online petition launched by Conservancy Hornby had more than 32,000 signatures and counting as of Friday afternoon.

“It’s amazing. We put it out there, we thought if we get a thousand (signatures) we’ll be ecstatic I mean you know people can clearly understand, I think the big thing right now is the southern killer whales,” said Scott.

“They (DFO) will manage a fishery until it is almost close to biological extinction and that’s when they put a closure. What we are trying to do here is get a closure in place before it’s too late,” said McAllister.

The DFO said they are always refining their science and reviewing their approach, but are confident in their findings.

“We have taken steps to protect the stocks where it appears to be less healthy and then for the stocks where they do appear to be healthy, the overall approach we take is cautionary,” said Davis.

The DFO’s decision is expected in early February.