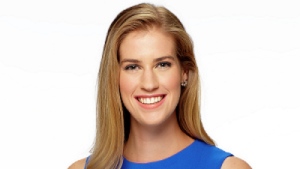 Sarah Reid has a natural sense of curiosity and love of storytelling. She fell in love with TV broadcasting after volunteering at a community station in Toronto.

After hosting a cooking show at the station for two seasons, she decided to pursue a career in journalism. The Toronto native graduated from the University of Western Ontario's Media Theory Production (MTP) program, in the broadcast journalism stream.

Her love of the outdoors and being active took her west, where she completed her Master's of Journalism at the University of British Columbia.

Sarah has always loved sports and has previously worked at Sportsnet, TSN, and CTV Vancouver.

Sarah joined the CTV Vancouver Island team in 2019 as a multi-skilled journalist. Now, she spends her time exploring the island.

Outside of work, Sarah enjoys being active, playing sports, exploring local restaurants, and smiling at dogs.

No watches or warnings in effect.
View Full Forecast >>

HAVE A NEWS TIP?CONTACT US